You should read this: (Link below (KCNA) is sporadic in working. But I pulled the meeting data from it. So it does work in Russia at least.) I comment at the end of the long meeting… (Another link – uriminzokkiri.com) 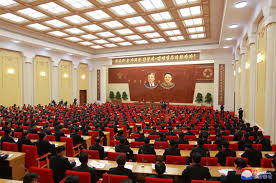 Pyongyang, April 21 (KCNA) — The Third Plenary Meeting of the Seventh Central Committee of the Workers’ Party of Korea took place in Pyongyang on April 20.

Present as observers were members of the WPK Central Committee and party and administrative officials of ministries, national institutions, provinces, cities and counties, major industrial establishments and institutions and co-operative farms and members of the armed forces organs.

The plenary meeting dealt with the following agenda items:
1. On tasks of our party to further accelerate socialist construction as required by a fresh high stage of the developing revolution
2. On bringing about a revolutionary turn in science and education
3. Organizational matter

The first agenda was discussed at the meeting.

Kim Jong Un made a report on the first agenda.

He said that the plenary meeting was to be convened to discuss and decide important matters for attaining goals of higher stage of socialist construction as required by the developing revolution and under the prevailing situation.

Saying that the overall situation is rapidly changing in favor of the Korean revolution thanks to the DPRK’s proactive action and efforts after the declaration of completing the state nuclear force last year, he informed that a fresh climate of détente and peace is being created on the Korean peninsula and the region and dramatic changes are being made in the international political landscape.

He said that the miraculous victory of having perfectly accomplished the great historic cause of building the state nuclear force in a short span of less than five years is the great victory of the WPK’s line of simultaneously pushing forward the economic construction and the building of a nuclear force and, at the same time, a brilliant victory that could be won only by the heroic Korean people.
He referred to the progress made in the economic construction along with the all-party, all-state and all-people struggle for implementing the above-said line.

He declared with pride that the historic tasks under the strategic line of simultaneously developing the two fronts set forth at the March 2013 Plenary Meeting of the Central Committee of the Party were successfully carried out.

He said that the victory of the WPK’s line was won and thus the struggle of the Korean people who worked hard with their belt tightened to acquire a powerful treasured sword for defending peace was successfully concluded and the firm guarantee by which our descendents can enjoy the most dignified and happiest life in the world was provided.

He said that no nuclear test and intermediate-range and inter-continental ballistic rocket test-fire are necessary for the DPRK now, given that the work for mounting nuclear warheads on ballistic rockets was verified as the whole processes of developing nuclear weapons were carried out in a scientific way and in regular sequence, and the development of delivery and strike means was also made scientifically. He added that the mission of the northern nuclear test ground has thus come to an end.

He clarified the WPK’s peace-loving stand to make positive contributions to the building of the world free from nuclear weapons in conformity with the aspiration and desire common to mankind, provided that the DPRK’s might was put on the level wanted by it and it became possible to reliably guarantee the security of the state and the safety of the people.

He said that today when the historic tasks listed by the strategic line of simultaneously developing the two fronts were successfully carried out, the WPK is facing important tasks to accelerate the advance of the revolution with confidence in victory and thus hasten the final victory of the socialist cause.

He clarified that at the present stage in which the DPRK was successfully put on the position of the world-level politico-ideological and military power, it is the strategic line of the WPK to concentrate all efforts of the whole party and country on the socialist economic construction.

He noted that the immediate goal of the struggle for realizing the new strategic line is to keep production going at full capacity at all industrial establishments and reap a rich harvest in all agricultural fields during the period of carrying out the five-year strategy for national economic development and thus make the people’s laughter resound far and wide across the country.

He pointed out that the long-term goal is to put the national economy on a Juche, modern, IT and scientific basis and provide all the people with affluent and highly civilized life so that they can live as well as others.

He clarified the tasks for thoroughly carrying out the new strategic line, and ways for doing so including the issue of prioritizing economic work in the overall work of the party and the state, tapping all the human, material and technical potentials of the country for economic development.
He called on all the fields and units to thoroughly rely on science and technology, steadily improve the self-development spirit and effect production surge and leap under the unfurled slogan of self-reliance and self-sufficiency.

In order to thoroughly implement the new strategic line on channeling all efforts on the economic construction, it is necessary to drastically enhance the role of party organizations, he stressed.
He urged the economic guidance organs including the Cabinet to occupy their position as the master responsible for the economic affairs, meticulously organize the operation and command for making rapid economic progress. He also urged all the fields and units to be unconditionally subordinate to the unified command of the Cabinet for implementing the economic policy of the party.
Speeches were made on the first agenda item at the plenary meeting.

Resolutions on the first agenda item were adopted with unanimous approval.

The resolution “On Proclaiming Great Victory of the Line of Simultaneous Development of Economic Construction and Building of Nuclear Force” specified the following decisions.

First, we solemnly declare that the sub-critical nuclear test, underground nuclear test, making nuclear weapon smaller and lighter and the development of the super-large nuclear weapon and delivery means have been carried out in order in the course of the campaign for implementing the party’s line of simultaneously developing the two fronts and thus the work for mounting nuclear warheads on ballistic rockets has been reliably realized.

The northern nuclear test ground of the DPRK will be dismantled to transparently guarantee the discontinuance of the nuclear test.

Third, the discontinuance of the nuclear test is an important process for the worldwide disarmament, and the DPRK will join the international desire and efforts for the total halt to the nuclear test.
Fourth, the DPRK will never use nuclear weapons nor transfer nuclear weapons or nuclear technology under any circumstances unless there are nuclear threat and nuclear provocation against the DPRK.
Fifth, we will concentrate all efforts on building a powerful socialist economy and markedly improving the standard of people’s living through the mobilization of all human and material resources of the country.

Sixth, we will create international environment favorable for the socialist economic construction and facilitate close contact and active dialogue with neighboring countries and the international community in order to defend peace and stability on the Korean peninsula and in the world.
The resolution “On Concentrating All Efforts on Socialist Economic Construction to Meet Requirements of New High Stage of Developing Revolution” clarified the following decisions.

First, we will orientate the overall party and state affairs into the socialist economic construction and concentrate all efforts on it.

Second, the Party and working people’s organizations, power organs, law enforcement organs and armed forces organs should enhance their roles in the struggle to concentrate all efforts on the socialist economic construction.

Third, the Party organizations and political institutions at all levels should regularly control and review the implementation of the decisions made at the Third Plenary Meeting of the 7th Central Committee of the WPK so as to ensure their thorough implementation.

Fourth, the Presidium of the Supreme People’s Assembly and the Cabinet should take legal, administrative and technical measures to carry out the tasks set forth in the resolutions of the plenary meeting of the WPK Central Committee.

The second agenda item was discussed at the meeting.

Kim Jong Un made a report on the second agenda item.

He said that in recent years our Party has made not a few achievements through active measures to boost science and education to suit the requirements of the higher stage of the developing revolution. He also analyzed and reviewed drawbacks in the fields of science and education and their causes.

He set forth the strategic slogan “Let us make a leap forward by dint of science and guarantee the future by dint of education!” and clearly specified the tasks and ways for putting spurs to building a scientific and technical power and a talent power.

The resolution on the second agenda item “On Effecting Revolutionary Turn in Science and Education” was adopted.

The plenary meeting discussed the organizational matter, the third agenda.

There was a by-election of a member of the Political Bureau of the Workers’ Party of Korea Central Committee.

Kim Jong Gak was by-elected member of the Political Bureau of the C.C., WPK.

There were recall and by-election of members and alternate members of the Political Bureau of the Party Central Committee.

The main spirit of the Third Plenary Meeting of the Seventh Party Central Committee is to further accelerate the advance of our revolution under the unfurled banner of self-reliance on the basis of the great victory of the line of simultaneously pushing forward the economic construction and the building of a nuclear force and thus attain ahead of schedule the higher goal of the socialist construction put forward at the Seventh Congress of the WPK, he noted.

Stressing that the core and main principle of the new revolutionary line of the Party is self-reliance, he underscored the need to maintain indomitable perseverance in the spirit of self-reliance as ever and open up the avenue for prosperity and bring earlier the rosy future.

Our goal is to activate the overall national economy and put it on an upward spiral track and thus establish independent and modern socialist economy, knowledge-based economy, in the period of carrying out the five-year strategy for the national economic development, he stated.

He stressed the need to attach importance to science and education and develop them in order to achieve the higher goal of socialist construction by thoroughly carrying out the new revolutionary line of the Party.

In order to realize the revolutionary line and the policy of the Party, officials should make strenuous efforts with the strong determination and work hard with high abilities to put their fields and units on the level as required by the Party, he added.

This is not how the western press is telling this meeting. I will make it simple….NK (North Korea) has finished their nuke program and are done with all that is necessary. They have no need for farther testing and have achieved what they desire…

It is what it is…