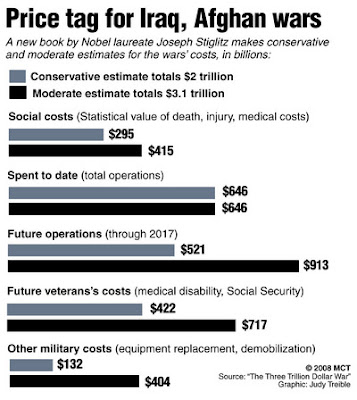 Every once in a while I come across a statement in the world press that kinda just floors me. Usually something someone says that is printed verbatim. Being an American, I stay involved in American news. I still have contacts in DC and when they give me the heads up, I look around for the connections in mainstream media. Today it is two statements:

“We will stay in Afghanistan as long as it takes to finish the job. Obviously that is not forever.” (I wonder if he smiled when he said that?)

I just wonder if you realize that it is 2009 and they are talking about staying in Afghanistan at least until 2017.

When did this war start?

Tidbit of Data: Afghan War Costs US $3.6 Billion Per Month!

A better question would be: Why did this war start?

You got any answers for why this war started?

Another Tidbit: 2017 is the actual limit to the budgeted money for this war (Until updated future operations are reevaluated). So he could not say a date any farther than 2017 because he has no authority to express any farther information.