Threatening Iran–Saber-Rattling Is Not A Strategy! 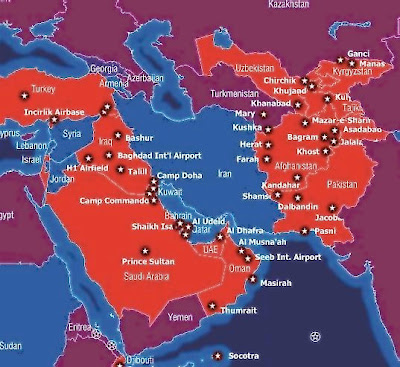 Kind of an Interesting Picture: Iran is surrounded by USA Military Bases!

“We don’t know what’s going on behind closed doors in Washington — or what Mr. Olmert heard from Mr. Bush. But

saber-rattling is not a strategy. And an attack on Iran by either country would be disastrous.”

“If sanctions and incentives cannot be made to work, the voices arguing for military action will only get louder. No matter what aides may be telling Mr. Bush and Mr. Olmert — or what they may be telling each other — an attack on Iran would be a disaster.”