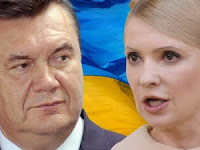 This article is for the 4 e-mails that I received that told me in not polite terms, that I was full of #@&*! That the election has been called and is done in Ukraine and because the Western world has called it fair, it is and will be fair, period! (Other words the election is signed sealed and delivered!) Oops – is all I can say…

A Ukrainian court has suspended the result of the recent presidential election, following a challenge by losing candidate Yulia Tymoshenko.

Mrs Tymoshenko, the Prime Minister, went to the supreme administrative court in person on Tuesday claiming the result was rigged.

The court says the result should be suspended while it considers the evidence she has submitted.

It also says the inauguration of winner Viktor Yanukovych should be delayed.

Ukraine’s parliament had agreed on Tuesday that Mr Yanukovych should be inaugurated on 25 February.

Looks like that inauguration on 25 February is from people that expect Yulia to bow out gracefully! Yulia according to reports had around 9 volumns of information leading to proof of the accusations of fruad issues during the elections. Yulia says she has videos, written testaments, pictures and even poll officials/observer testaments that prove her case.

I saw videos of boxes of information going into the courthouse and Yulia marched that evidence in herself. I knew right then that it is going to take awhile to sort through this mountain of information!

I find it interesting…

PS: The real questions are: Does Yulia have a case? – and – What happens next? – if she does. I also feel it is good to know that Yulia Timoshenko is afforded the ability to challenge the results of the election in court. This is a good see this of Ukraine’s system of government. No country should allow allegations of fraud and falsifications in their elections, without due process to determine the whole truth of the matter. It will be very interesting to hear and see all the details of these allegations.