Mikhail Leontiev devoted his column on the first Russian television channel to Thomas Barnett’s theory. What appeared to be an intellectual lucubration in 2001 is currently being realized. Everyone must now rethink their vision of the wars of the past sixteen years.

Trump delivered a speech at the UN General Assembly. As Saltykov-Shchedrin [1] pointed out once: “Kind folk awaited bloodshed and massacres from him, instead, he ate a doughnut.”

“Strong sovereign nations allow citizens to flourish in the fullness of life provided for by God. We in America do not seek to impose our way of life on anyone. And we want ours to be so brilliant as to serve to the rest as an example, “said US President Donald Trump.

Hooray! He is giving a slack. In the past he would have aspired to impose a resplendent image to follow! But now he has given up all the aspiring. At the same time, note, to erase from the face of the Earth and to overthrow is still in fashion. Trump threatens to destroy North Korea, Iran, overthrow the regime in Venezuela … But to try to impose an image nowadays is a big no-no.

“The war should not be conducted against individual states with a mobile political situation, but against regions of the world, because those states are coded in this program of destruction. Of course, they will start from one country or another, then the infection will spread until everything collapses, as we can see today in the example of the Middle East. Of course, this is a policy, the implementation of which began after September 11, 2001, and we failed to grasp the significance of the events of September 11. None of the wars that have been fought since then has been concluded”, said French political scientist, journalist (Syria, Damascus) Thierry Meyssan.

And it is true. For 15 years, none of the wars came to an end! Thierry Meyssan, a well-known conspiracy theories specialist, scholar and Orientalist, claims that we did not notice a radical change in the American strategy since the September the 11th. 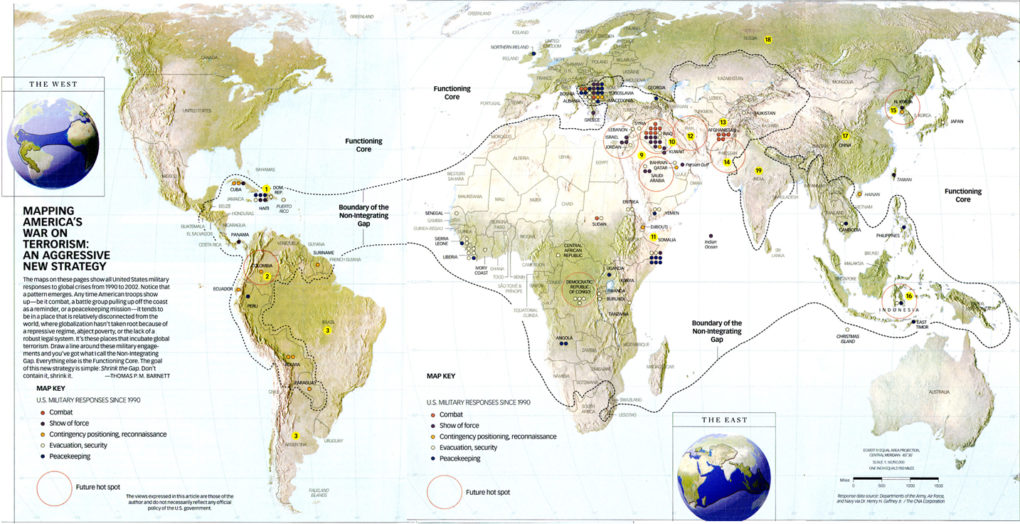 Here is this map from Hell, to which Meyssan refers, from the book of geostrategist and publicist Professor Barnett, who served as an assistant to Admiral Cerbowski, who directed the Department of Transformation of the Armed Forces at the Pentagon. Virtually all of Africa, Central and Latin America, except Brazil and Argentina, fall into the zone of “non-integrable states” doomed to chaos.Then, naturally, the entire Middle East with Turkey, the Persian Gulf, Iran and Pakistan, all Middle and South-east Asia and all The Balkans, except Greece. At the same time, Russia, India and China are prudently surgically removed out of the “nightmare zone”.

“The power of Leviathan must be released only occasionally. But here’s what you can promise the American people, our citizens, and the whole world. If we release this Leviathan, then we promise, we guarantee that immediately, immediately afterwards we will install the functional governance. You should not plan a war if you do not expect to find peace, “states US political analyst Thomas Barnett.

And they will inherit the Kingdom! … For the slow-witted: the functional governance is just an administration of occupational forces. American ones. For those in the know: what kind of American administration can be offered for “non-integrable territories”? The key is in the name-Non-integrable. You have been told! And why on Earth anyone would want to create a “perfect image”for them? Let them wallow in squalor.

Let me quote Meyssan once again : none of the wars that started after September 11 is over.