The Vice-Admiral Kulakov gets to go back to Protecting Russia! 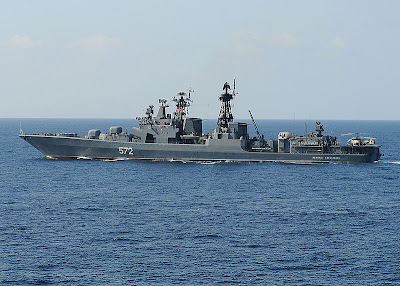 Picture is of the Admiral Vinogradov also a Udaloy Destroyer – Could not find a picture of the Vice-Admiral Kulakov!

Yes 18 years…
It seems that the Vice-Admiral was almost permanent history several times while in storage because of a lack of funding. But it seems that Lady Luck was with the old warship and they found the money to get her some new clothes! 🙂
The Vice-Admiral Kulakov has a displacement of 6,200 tons, a length of 162.99 m, a speed of 35 knots, a range of 19,400 km, and a crew of 300.
It is now armed with AK-100 artillery systems, Rastrub-B and RBU-6000 antisubmarine complexes, Kinzhal antiaircraft missile systems, and anti-submarine torpedoes. It also carries two Ka-27 Helix-series helicopters.
I have always found that destroyers (any) are my favorite warships…
Windows to Russia!
➤