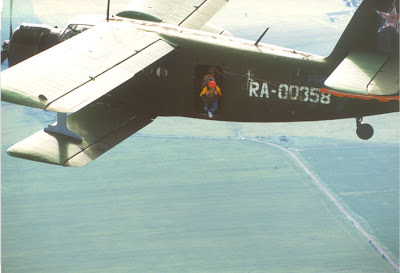 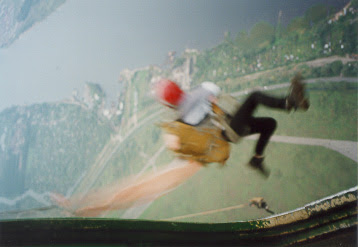 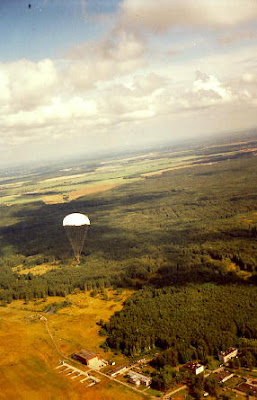 “The weather whispers…”
by Svetlana Prostova

“The weather whispers to borrow but jump.”
Saying in Russian aeroclubs.

That was a sunny day… I was one in the group of thirty, people who was ready to make there first parachute jump. I knew I was crazy but I knew I would make it. I was ready, I was ready already for a year to make the parachute jump to see that I became a new person, person who afraid of nothing in the life. And even more parachute jump for me was like symbol of trusting to Life. And I already knew that when you trust Life Life will trust you and help provide your great ideas to become true…

And it was long lecture before we got our landing parachutes we was told how to count seconds 1001, 1002, 1003, we were told how to pull the ring – to open parachute, how pull ropes to manage the flight how to land and not to break legs and a lot of another necessary things. And maybe the main thought was repeated and repeated again: “You decided to jump – you jump!”

And we were standing in the line already wearing parachutes and our instructors checked again and again our equipment. Then we were sitting in a tiny airplane AN-02 and it’s running very very fast on the strip and ah! we already flying very fast and almost vertical. And all blood in the body ran like crazy and fear and admiration because you already know you will made it, you don’t have any chance. And our parachutes were fasten to the line in the selling of the plane and command “Stand up and, first – go, second –go, third -go…” And I at the edge of the plane and instructor’s slap on my shoulders and command to go! And Earth so far from you that you even don’t think about the distance to the ground, and the Step – step out, step out of you, step to meet uncertainty…. (Later when I thought about it I found just the only thing alike this Step and we all made it! It was when we left mothers body to live in the World.)

And admiration and happiness – I made it! And thought what came after I must count seconds 1001, 1002 and parachute was opened by automatics (so my admiration took a time 😉 ). And the flight and my attempts to pull the parachute ropes what was not a necessary really I did it just to do something and a little boy who was running below on the Ground, saluting me. And landing, and caring parachute (20 kg) in arms for 3 kilometers and waiting another people and talks about nothing.

And riding home and incredible feeling that your Soul is so clean like you just got birth, and the Jump was like shower for Soul – good long shower, and Past does not exist anymore and Future means nothing to you: no plans, no expectation – just happiness and realizing that all in your life will be good.

And when I was felling asleep this night I’ve seen bright blue sky and myself in it. And scared thought that one day I would remember about it like old almost forgotten dream….

It’s a sunny day in Moscow, my birthday coming, Kyle offer to write something to his blog. I decided to tell world about my first parachute jump what I made three years ago. I think that’s the greatest experience of my Life what I could share with you. And one more thought I will ask Kyle to let me one more jump with parachute as my birthday present.

Q: Is it dangerous to jump with parachute?

A: Yes, that’s very dangerous! A friend of mine remarried and gave birth a son after his first jump ;).

Q: Is it good to jump with parachute?

A: I think it is. Modern Buddhists think that person loose 10% of karma when he makes this step.

Some of them telling about stop of consciousness/mind when you step out.

Q: Are you going to jump with parachute professionally.

Q: When are you going to make new jump.

A: I don’t know yet. Maybe this weekend, maybe next, maybe in autumn. Kyle will be with me and take a lot of pictures, I told you how it was inside and he describe how it will be from outside ;). I so love him!