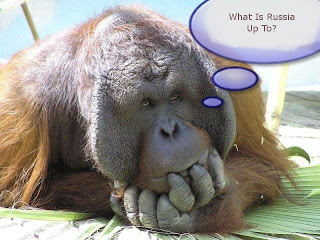 I was drinking my morning cup of coffee here in Moscow Russia. I was thinking about what is Russia and surrounding friends up to?

Lets start with a rematch in the sports:

On May 30 Russian giant Nikolay Valuev will defend his WBA heavyweight title against the only man that’s ever beaten him, Ruslan Chagaev of Uzbekistan. (Link)

That will be good because Valuev has wanted a chance to redeem himself. So while Valuev is preparing for his biggest match of his career. Lets go to georgia and see what fun Saakashvili is having with the locals and their show of love for him…

Georgian opposition activists, in their sixth day of street protests demanding the resignation of President Mikheil Saakashvili, they have put up tents in front of his official Tbilisi residence on Tuesday. (Link)

Isn’t that sweet, everyone loves him so much that they want to be close to Saakashvili. Could you imagine what would happen in America if people tried to get close to the president. (Camping on the White House lawn and streets?) Ouch…

Lets take a wander over to Chechnya, where police seized 60 kilograms of explosives on April 9, a senior Interior Ministry official said on Tuesday. They also seized, about 15 million counterfeit rubles ($450,000), mostly in 1,000-ruble denominations, and $90,000, in $100 bills, as well as printing equipment and materials, including paper with high-quality imitation security features. (Link)

While the crooks are making the cops work overtime in Russia, lets go look at…

An eight-year-old girl rescued five children from a burning house in Russia’s Samara Region, but failed to save her younger sister, local investigators said on Tuesday. (Link) Sad!

At least most made it out – But why where they left alone?

By going ahead with the war games, NATO appears to be offering support to Mikhail Saakashvili, the Russian diplomat says. He says the move looks like ‘some sort of a challenge’ not only to the Georgian opposition but also to South Ossetia, Abkhazia and Russia. (Link)