Lets have a look at what Russia is doing this week:

How about we start with Medvedev? It seems that Medvedev is having a really good time this week. It seems that he is in the USA on a visit. Now, in my opinion he just did the most important part of his visit and the rest of the trip doesn’t matter…

Russian President Dmitry Medvedev kicked off his five-day visit to the United States with dinner with Californian Governor Arnold Schwarzenegger in San Francisco.

What a deal! To meet the Terminator in person. That has to be the highlight of his trip even if Medvedev does not want to admit it. Just look at Medvedev’s face. He is probally thinking of the famous line from Terminator 1 – “I’ll be back”…

So while Medvedev is gallivanting around America, lets see what else is happening in Russia?

It so happens that Belarus has declared a “full fledged gas war with Russia!” Now I am not sure that Russia really understands that this is “war”, but according to the Belarusian President Alexander Lukashenko it is war… (Russia says, Pay your bill and send receipts for the gas transit and all will be happy…) What is it with these Ex-Soviet States Presidents that act like rejects all the time? Is it something in the air or water?

Well while Belarus has declared war on Russia, lets see what else is happening? 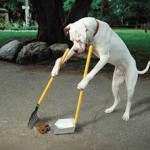 It seems that in Moscow that people have reached a new level of sophistication. Moscow parks are trying to get people to clean up after their dogs do, what dogs have to do, when they go out for a walk. They are now supplying doggy bags and pooper scoopers to help clean up with. It seems that all the excess doggy doo doo is blamed on people and their dogs that they keep in their residence. What I have a question about is, Why are the unbelievable numbers of a million excess dogs that run all over Moscow not blamed? I know that those dogs do, what dogs have to do, also… (Boza and I had to use sticks and bad language and barking, to dissuade a pack of about 15 dogs, not to bother us, just today…)

So while Moscow is coming down on doggy’s that have a family to care for them. Lets see what else is happening?

We do not want to leave Putin out of the story. (Do We?) Russian Prime Minister Vladimir Putin and his Ukrainian counterpart Mykola Azarov have agreed to discuss energy cooperation in Moscow and this just happens to be happening while Belarus plays games. It seems that Ukraine has smartened up and have made it very clear that while they do not take sides on this Russian / Belarus “War of Gas”, that Ukraine will be happy to increase the flow of gas to Europe and bypass Belarus completely if need be. Obviously Ukraine has no issues with kicking Belarus in the teeth to get more money in transit fees…