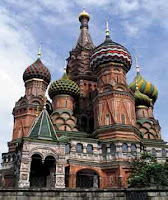 Looks like Russia is up to her normal stuff…

Russian President Dmitry Medvedev has paid a pleasant state visit to Uzbekistan. He came back to Moscow with some delicious Uzbek flat-bread, some natural gas and a honorary PhD from the University of World Economy and Diplomacy in Tashkent.

While Medvedev was trotting around the country enjoying life, Russia was redrawing borders between Georgia and Russia…

The legal registration of Russia’s shared borders with newly proclaimed independent states began on Tuesday with the appointment of the special presidential representative on the demarcation of borders with CIS countries. Otherwise from now on all Russian maps printed are to have a designated border for South Ossetia and Abkhazia. (That will upset Saakashvili)

So while Russia is making Saakashvili life miserable, lets go to Kiev for a second and see why it is no longer free to go to a cemetery…

The mayor of Kiev – Leonid Chernovetsky, known for his extravagant initiatives, has invented a new way to increase the city’s budget. From now on, people will have to pay for visiting Kiev’s cemeteries. (What!)

OK that just kinda falls into place with what I saw about Kiev for almost two weeks and no thank you that is just not right. Now while we talk about cemeteries, the thought of churches come up and issue such as who is the new head of the Orthodox church?

Metropolitan Kirill of Smolensk and Kaliningrad has been elected the new head of the Russian Orthodox Church. The Council, which comprised clergymen, monks and laymen, announced on Tuesday the results of the voting for the post of Patriarch of Moscow and all Russia.

Some media sources earlier cited an anonymous Russian Navy official as saying that Russia is planning to redeploy a submarine from the Northern Fleet to the Sevastopol base in Ukraine’s Crimea, which triggered Kiev’s angry response.

Kiev never shuts it mouth on certain issues, what Kiev needs to do is concentrate on Ukraine and quit worrying about Russia.

So once again Russia is going round and round with her next door neighbors and it does not look like it will settle down anytime soon.