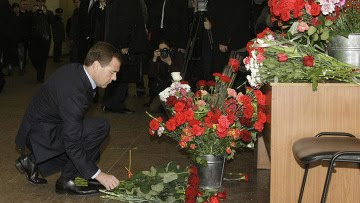 Medvedev laid a wreath at the spot on the Lubyanka station platform where the doors of the second carriage opened and the first bomber detonated her explosives, killing at least 24 people.

The president said those behind the terrorist attacks would be tracked down and eliminated. “These are simply beasts, and regardless of their motives, what they did is a crime by any legal or moral standard,” Medvedev told reporters on hand for the occasion.
“I have no doubts whatsoever that we will find them and eliminate all of them,” he said, adding that everyone involved in the November bombing of the Nevsky Express had been killed. Twenty-seven passengers died in that attack, the first major terrorist incident beyond Russia’s North Caucasus since 2004.
While Medvedev was paying respect to the dead, Putin was checking on the victims that lived…

Putin flew in from Siberia and went immediately to the Sergey Botkin general clinical hospital Monday night to visit victims of bombings of the two metro trains. He went to the hospital straight from the airport. Earlier in the day, he had cut short a working trip to the Siberian city of Krasnoyarsk and decided to return urgently to Moscow.

Earlier in the day Medvedev gave the orders for the government to get compensation in order for the families of the deceased and injured. Putin had everything done and in order even before he got back to Moscow.
I find myself amazed at times at how these two very powerful men work together like a well oiled machine. But anger does not seem to taint their judgment or their work. I have seen the anger flaring in Putin’s eyes at a press conference, as he was still in Siberia and we all heard Medvedev express the desire for the demise of the ones who performed this terrible act of terrorism. But both of them do their jobs together and never complain.
Time to watch what the future brings as Russia hunts down those who attacked her Moscow Metro and the innocent people that ride her cars everyday…
Windows to Russia!