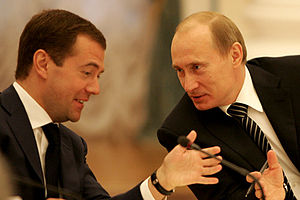 Russia is not seeking the status of superpower, but it will defend its interests “to the utmost”, Prime Minister Vladimir Putin said.

He warned against a disparaging attitude “to anyone, including small states”.

“A disparaging attitude to, say, Andorra, or any other small country would be unacceptable to us. I have been practicing martial arts all my life and I have a certain philosophy with regard to my partner: no matter what he is, you must treat him respectfully,” Putin said in an interview with three federal television channels on Monday, October 17.

“As for our critics abroad, and I mean critics who speak about our imperial ambitions, what can I say? We see what is happening, for example, in Europe: integration there has reached such a level that was unimaginable even in the Soviet Union,” Putin said in an interview with three federal television channels on Monday, October 17.

“They can do anything there and it’s okay. But we have imperial ambitions. To all these critics, and they are certainly unfair critics, I can say the following: You know what? Mind our own business – fight growing inflation and soaring state debt, excess weight after all. Get down to work,” the prime minister said.

He stressed that there are no plans to recreate the Soviet Union. “Russia has no interest in that today. It is not interested to assume excessive risks and bear excessive loads for the countries that for some reasons are trailing behind us in certain fields,” Putin said.

At the same time, he made it clear that Russia would be ready to carry its share of the burden and responsibility for expanding the common economic space.

If elected president in 2012, Vladimir Putin will continue along the road President Dmitry Medvedev has been traveling for the last four years.

“If the voters, citizens, our people accept the configuration of power we have proposed, I, for example, will not make any radical changes in what has been done by Dmitry Anatolyevich Medvedev as president of our country,” Putin said in an interview with three federal television channels on Monday, October 17.

“We will have to see how all this works, but frankly speaking I see nothing revolutionary there either,” he added.

“As president Medvedev acted according to his own understanding of what is good and what is bad, and according to the situation in the country,” Putin said.

“We have identical positions on strategic questions. But we are not one person. We are different people and at some point Dmitry Anatolyevich decided to take steps towards humanizing certain aspects of our life. This is his right as head of state,” the prime minister said.

“We will look together at how this works. I think these are steps to develop our political system,” Putin said.

Dmitry Medvedev will be able to implement his ideas announced during his presidency when he becomes head of government in 2012, Prime Minister Vladimir Putin said.

He stressed that during his term of office President Dmitry Medvedev has transferred the solution of critical national development issues from office discussions to practical steps. These fundamental things are stated in the national development program up to 2020 and include development of democratic institutions, diversification, and economic modernization.

“It is very important to have tools for carrying on this work,” Putin added.

“If Dmitry Anatolyevich [Medvedev] leads the United Russia [election] list, if people vote for this list and if a capable parliament is elected, then, relying on this parliament, he will be able to form a capable government in order to implement the program he has put on the practical agenda,” Putin said.