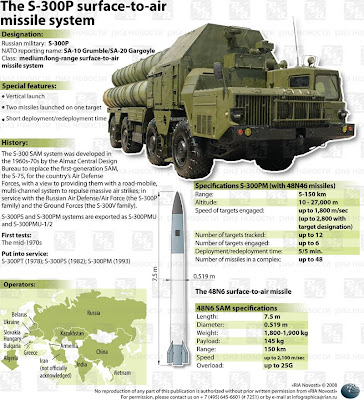 With all the hoopla about Israel wanting to attack Iran and trying to get permission from Obama to overfly Iraq, the installment of these Russian S-300’s would virtually assure Iran of a unbeatable defense to Israel attack.

Why is the S-300 air defense so important to Iran?

Well look at what Wikipedia says:

The S-300 is also capable of destroying ballistic missile targets, and is regarded as one of the most potent anti-aircraft missile systems currently fielded. Its radars have the ability to simultaneously track up to 100 targets while engaging up to 12. S-300 deployment time is five minutes. The S-300 missiles are sealed rounds and require no maintenance over their lifetime. An evolved version of the S-300 system is the S-400 (NATO reporting name SA-21), that entered service in 2004. (Link)

So while Iran is being lambasted with reports from Western press that Israel wants the OK from Obama to attack and get Americas help.

Iran needs that protection and now! (Israel says threat of attack on Iran, no bluff ” If no crippling sanctions are introduced by Christmas, Israel will strike,” Sneh said. “If we are left alone, we will act alone.” )