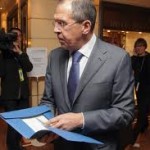 Under the title “Why the United States does not want to elect Putin as the Russian president”  Komsomolskaya Pravda daily quoted some excerpts from a survey of a famous US political scientist and economist William Engdahl. Engdahl’s survey was published in Germany. The newspaper noted that Engdahl is convinced the US is seeking to discredit the Russian national leader, because the latter remains the major obstacle on the way for the West’s domination in the world.

“Washington clearly wants ‘finito’ with Russia’s Putin as in basta! Hillary Clinton and friends have apparently decided Russia’s prospective next president, Vladimir Putin, is a major obstacle to their plans. Few however understand why. Russia today, in tandem with China and to a significant degree Iran, form the spine, however shaky, of the only effective global axis of resistance to the world dominated by one sole superpower,” Engdahl noted.

“No mistake, Putin is not a world champion practitioner of what most consider democracy. His announcement some months back that he and current President Medvedev had agreed to switch jobs after Russia’s March 4 Presidential vote struck many Russians as power politics and backroom deal-making.

“That being said, what Washington is doing to interfere with that regime change is more than brazen and interventionist. The same Obama Administration, which just signed into law measures effectively ripping to shreds the Bill of Rights of the US Constitution for American citizens is posing as the world’s supreme judge of others’ adherence to what they define as democracy,” the political scientist remarked.

Engdahl offers to consider Putin’s recent statement that the US interferes in the elections, giving them hasty assessments. It is easy to find an official annual report (delivered in August 2011) of the Washington-based non-government organization with an innocuous name of the National Endowment for Democracy, he writes. According to the report the organization has already penetrated very deeply everywhere in Russia. The National Endowment for Democracy funds the International Press Centre in Moscow, where about 80 non-government organizations can give press conferences on each topic. The endowment also funds numerous youth organizations and seminars for future chief executives in order to help young people to engage in politics. Over 2,783,000 dollars were officially spent in 2010 for tens of similar programs in all Russian regions, the US political scientist claims.

“Helping youth engage in political activism is precisely what the same NED did in Egypt over the past several years in the lead up to the toppling of Mubarak. The same NED was instrumental by informed accounts in the US-backed “Colour Revolutions” in 2003-2004 in Ukraine and Georgia that brought US-backed pro-NATO surrogates to power,” Engdahl assumed.

“The salient question is why Putin at this point? We do not need to look far for the answer. Washington and especially Barack Obama’s Administration don’t give a hoot about whether Russia is democratic or not. Their concern is the obstacle to Washington’s plans for Full Spectrum Dominance of the planet that Putin’s Presidency will represent,” he speculates.

“We can also expect a more aggressive use of Russia’s energy card with pipeline diplomacy to deepen economic ties between European NATO members such as Germany, France and Italy, ultimately weakening the EU support for the aggressive NATO measures against Russia. We can expect a deepening of Russia’s turn towards Eurasia, especially with China, Iran and perhaps India to firm up the shaky spine of resistance to Washington’s New World Order plans,” Engdahl underlined.