When Genocide Is Permissible (authored by Yochanan Gordon) 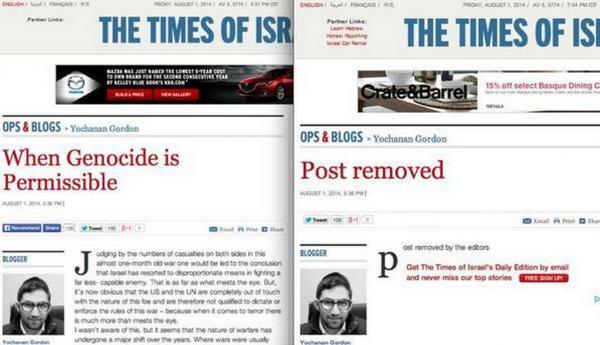 Judging by the numbers of casualties on both sides in this almost one-month old war one would be led to the conclusion that Israel has resorted to disproportionate means in fighting a far less- capable enemy. That is as far as what meets the eye. But, it’s now obvious that the US and the UN are completely out of touch with the nature of this foe and are therefore not qualified to dictate or enforce the rules of this war – because when it comes to terror there is much more than meets the eye.

I wasn’t aware of this, but it seems that the nature of warfare has undergone a major shift over the years. Where wars were usually waged to defeat the opposing side, today it seems – and judging by the number of foul calls it would indicate – that today’s wars are fought to a draw. I mean, whoever heard of a timeout in war? An NBA Basketball game allows six timeouts for each team during the course of a game, but last I checked this is a war! We are at war with an enemy whose charter calls for the annihilation of our people. Nothing, then, can be considered disproportionate when we are fighting for our very right to live.

The sad reality is that Israel gets it, but its hands are being tied by world leaders who over the past six years have insisted they are such good friends with the Jewish state, that they know more regarding its interests than even they do. But there’s going to have to come a time where Israel feels threatened enough where it has no other choice but to defy international warnings – because this is life or death.

Most of the reports coming from Gazan officials and leaders since the start of this operation have been either largely exaggerated or patently false. The truth is, it’s not their fault, falsehood and deceit is part of the very fabric of who they are and that will never change. Still however, despite their propensity to lie, when your enemy tells you that they are bent on your destruction you believe them. Similarly, when Khaled Meshal declares that no physical damage to Gaza will dampen their morale or weaken their resolve – they have to be believed. Our sage Gedalia the son of Achikam was given intelligence that Yishmael Ben Nesanyah was plotting to kill him. However, in his piety or rather naiveté Gedalia dismissed the report as a random act of gossip and paid no attention to it. To this day, the day following Rosh Hashana is commemorated as a fast day in the memory of Gedalia who was killed in cold blood on the second day of Rosh Hashana during the meal. They say the definition of insanity is repeating the same mistakes over and over. History is there to teach us lessons and the lesson here is that when your enemy swears to destroy you – you take him seriously.

Hamas has stated forthrightly that it idealizes death as much as Israel celebrates life. What other way then is there to deal with an enemy of this nature other than obliterate them completely?

News anchors such as those from CNN, BBC and Al-Jazeera have not missed an opportunity to point out the majority of innocent civilians who have lost their lives as a result of this war. But anyone who lives with rocket launchers installed or terror tunnels burrowed in or around the vicinity of their home cannot be considered an innocent civilian. If you’ll counter, that Hamas has been seen abusing civilians who have attempted to leave their homes in response to Israeli warnings to leave – well then, your beginning to come to terms with the nature of this enemy which should automatically cause the rules of standard warfare to be suspended.

Everyone agrees that Israel has the right to defend itself as well as the right to exercise that right. Secretary General Ban Ki Moon has declared it, Obama and Kerry have clearly stated that no one could be expected to sit idle as thousands of rockets rain down on the heads of its citizens, placing them in clear and present danger. It seems then that the only point of contention is regarding the measure of punishment meted out in this situation.

I will conclude with a question for all the humanitarians out there. Prime Minister Benjamin Netanyahu clearly stated at the outset of this incursion that his objective is to restore a sustainable quiet for the citizens of Israel. We have already established that it is the responsibility of every government to ensure the safety and security of its people. If political leaders and military experts determine that the only way to achieve its goal of sustaining quiet is through genocide is it then permissible to achieve those responsible goals?

I wish to express deep regret and beg forgiveness for an article I authored which was posted on 5TJT.com, Times of Israel and was tweeted and shared the world over.

I never intended to call to harm any people although my words may have conveyed that message.

With that said I pray and hope for a quick peaceful end to the hostilities and that all people learn to coexist with each other in creating a better world for us all.

Nothing about this article is condoned by me and it is for recording and not being allowed to be erased from history. I want people to think and this article is nothing but a propaganda piece, that is trying to push the envelope and see how far we can go to erase a people from this planet. In the old days it was easier than now and we have to resort to ways of testing the waters… 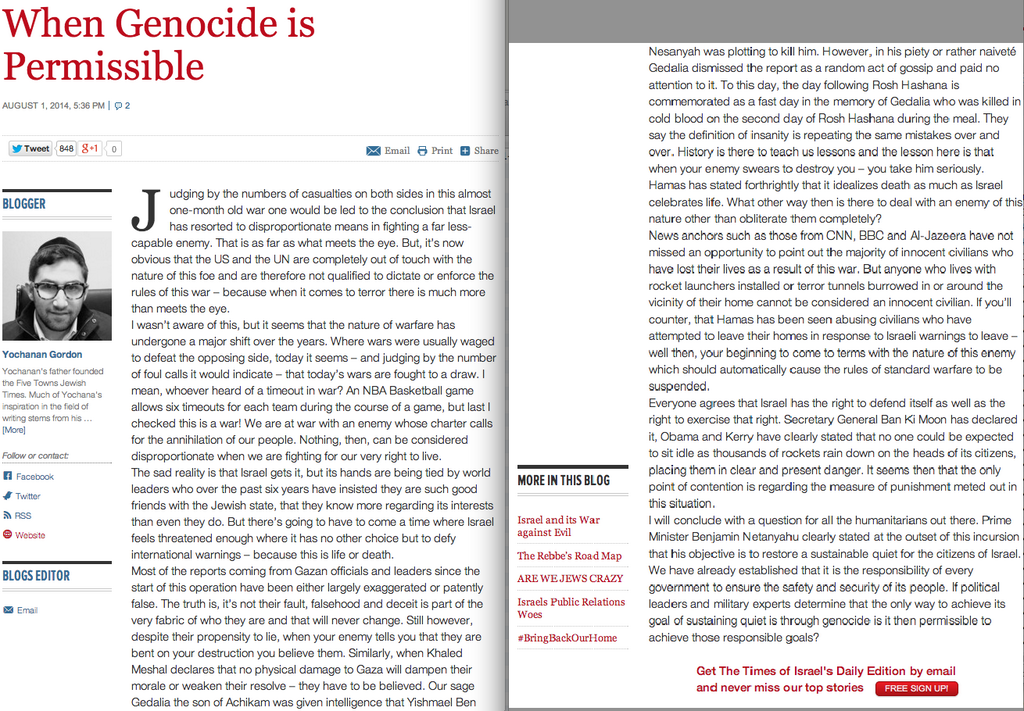