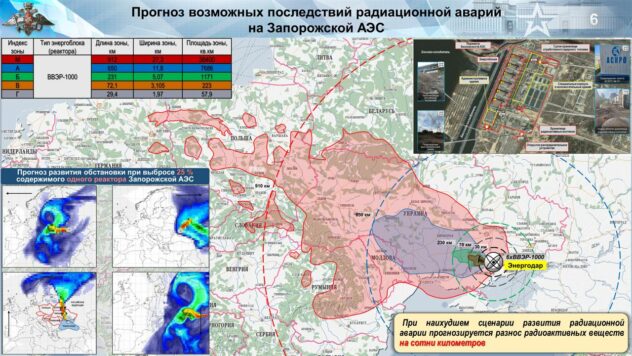 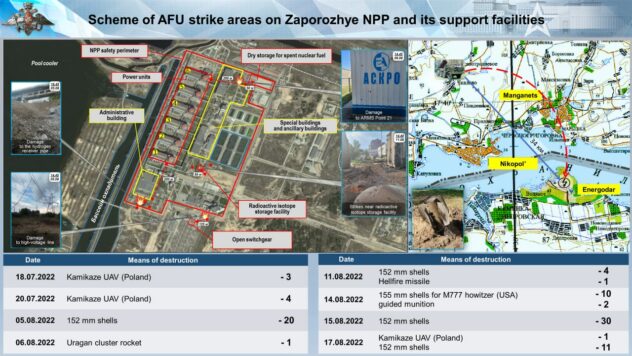 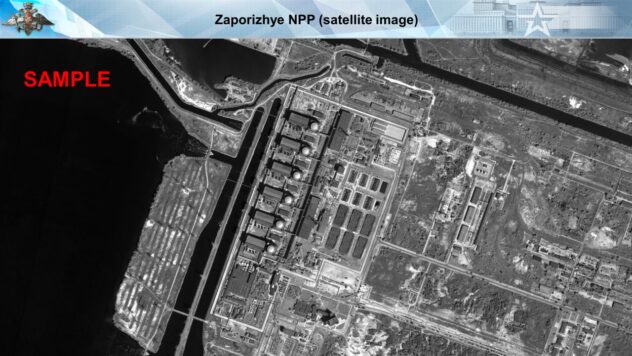 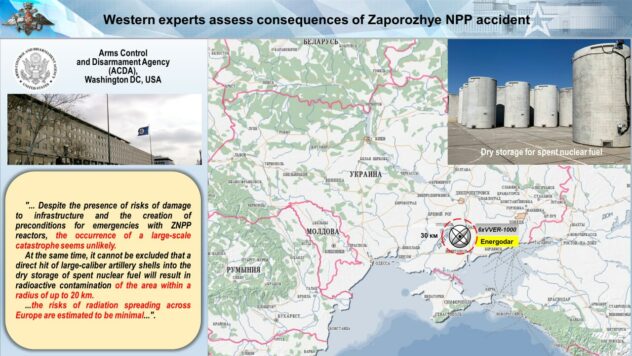 ⚡️The Russian Ministry of Defense warned how the emergency situation at the Zaporozhye NPP could develop and presented a map of possible consequences:

▪️ If the standby diesel generators and mobile pumps fail, in the event of an emergency, the core will overheat and the reactor plants at the largest nuclear power plant in Europe will be destroyed, releasing radioactive substances into the atmosphere and spreading them over hundreds of kilometers.

▪️ Such an emergency would cause the population to evacuate en masse and would have more catastrophic consequences than the impending gas energy crisis in Europe, which has been confirmed in forecasts provided by a number of European specialized organizations.

▪️ The map shows which countries will be at risk in the worst case scenario of a radiation accident. The potential disaster threatens, in addition to Ukraine itself, such countries as Romania, Moldova, Poland, Slovakia, Belarus and even Germany.

❗️ The Russian MoD’s latest update on the situation at the Zaporozhye NPP:

▪️ Ukraine’s ultimate goal in staging the false flag attack within the next few days at the Zaporozhye NPP is to create an exclusion zone of up to 30 km, introduce of international forces and foreign observers to the plant, and accuse the Russian military of nuclear terrorism.

▪️ If the Ukrainian shelling continues, specialists at the plant may consider putting the 5th and 6th power units into cold reserve, which would lead to the shutdown of the Zaporozhye NPP.

⚡️On August 19, the Kiev regime is preparing another provocation at Zaporozhye NPP during the visit of UN Secretary-General António Guterres to Ukraine, as a result of which the Russian Federation will be blamed for creating a man-made disaster at the power plant.

▫️In order to prepare for the provocation, the command of Dnepro operational-tactical group is deploying radiation observation posts near Zaporozhye by August 19. Also, the command is organizing training exercises for units of 108th Territorial Defence Brigade, 44th Artillery Brigade and military units deployed in Zaporozhye on measures to be taken in conditions of radioactive contamination of the area.

▫️Besides, units of 704th NBCP Regiment of AFU are to complete concentration in Zaporozhye area by August 19 and be ready for fixation of the accident at Zaporizhzhia NPP as well as for carrying out a set of measures for demonstration of supposedly liquidation of its consequences.

▫️Units of 44th Artillery Brigade of AFU are planning to launch artillery strikes on the territory of Zaporizhzhia NPP from firing positions located in Nikopol’ on August 19. The Russian Armed Forces will be blamed for their consequences.

▫️Ukrainian leadership has repeatedly spread rumours that Russian troops have occupied the nuclear power plant and are shelling AFU with long-range artillery systems while shielding themselves with NPP.

❗️We would like to point out that the Russian troops have no heavy weapons either on the territory of the plant or in the surrounding areas. Only security units are stationed there.

▫️The Armed Forces of the Russian Federation are taking all necessary measures to ensure the security of Zaporizhzhia NPP.

Russian Defence Ministry is ready to provide the IAEA with real high-resolution images, a sample placed on a slide, which shows that we do not place weapons, much less heavy ones, on the territory of this station. The Russian Defence Minister told UN Secretary-General António Guterres.

▫️We know that with a large number of military and commercial foreign satellites, the same information can be presented to the global public by the US side.

▫️At the same time, the US is keeping silent on objective data about the shelling and the situation at the nuclear power plant, thereby encouraging impunity for the Kiev regime and contributing to a possible nuclear catastrophe in Europe.

It is no coincidence that the media widely quotes the conclusions of experts of the American Arms Control and Disarmament Agency (Washington, D.C.) and some other similar institutions of Western countries, rather than the IAEA, which is entitled to such conclusions, that a large-scale catastrophe at ZNPP seems unlikely to occur.

▫️According to them, the concrete shelters of its nuclear reactors are 10 metres thick, and the plant was also designed and built to cope with incidents such as the downing of a civilian aircraft.

▫️However, it cannot be ruled out that a direct hit by large-calibre artillery shells into a dry storage facility for spent nuclear fuel would result in radioactive contamination of the area within a radius of up to 20 km, and an emergency situation at a nuclear reactor within 30 km at most. It is stressed that the risks of radiation spreading across Europe are estimated to be minimal.

▫️Thus, according to US experts, the consequences of the nuclear incident at Zaporozhye NPP would be limited and would not affect the territory of European countries.

I would like to remind the UN Secretariat and the entire world community that the principal cause of the accidents at Chernobyl plant and Fukushima NPP, despite the fact that in the first case there were nuclear reactor experiments and in the second case there was an earthquake and tsunami, was the failure of support systems, disruption of power supply, partial and complete blackout of cooling systems, which led to overheating of the nuclear fuel and destruction of the reactor.

▫️As a result of the Chernobyl accident, more than 20 European countries were contaminated with radioactive isotopes. Some 4,000 people have died from direct exposure to radiation, tens of thousands of cases of genetic deformities in newborns and hundreds of thousands of cases of cancer. Excluding the consequences of the forced evacuation, up to 100,000 people and more than 5.5 million people received an increased dose of radiation.

▫️At Fukushima, only at first sight the consequences may seem minor. Up to 500,000 people have been forcibly evacuated in stages, and the consequences of radioactive water dumped in the ocean will be felt by posterity.

▫️It seems to have been forgotten.

​​According to our experts, a similar situation may arise at Zaporozhye NPP because of AFU’s actions.

▫️For example, in case of failure of backup diesel generators and mobile pumps, in an emergency situation the core will overheat and consequently destroy the reactor facilities at Europe’s largest nuclear power plant, releasing radioactive substances into the atmosphere and spreading them hundreds of kilometres away.

▫️Such an emergency would cause mass population migration and have more catastrophic consequences than the impending gas energy crisis in Europe, as predicted by a number of European specialist organisations.

▫️UN Secretary-General Guterres is also reportedly planning to visit Odessa city as part of his trip to Ukraine from August 17 to 19, 2022. By this date, the Ukrainian Armed Forces plan to hold a staged provocation of a man-made disaster at Zaporozhye NPP, which consists of a radiation leak, destroying the integrity of the nuclear waste storage facility and putting the NPP reactor into an abnormal operating state.

▫️All this, according to their intention, should be a consequence of military action by the Russian Armed Forces on the territory of the nuclear plant, and incompetence of the Russian specialists involved in the operation of the nuclear facility.

▫️For the purpose of staging, AFU plans to fully deploy radiation observation posts in the formations, military units and subunits deployed in Zaporozhye Region of Ukraine, which are part of the Dneper task force, to provide 100 per cent of servicemen with NBC protection equipment, conduct training on chemical and radiation protection and other safety measures for the visit of Guterres. In particular, units of 44th Artillery Brigade have been ordered to be ready by August 19, to act in conditions of radioactive contamination of the terrain. Units of 704th Separate Regiment of AFU’s NBCP regiment are also being redeployed to Zaporozhye NPP area.

▫️Artillery strikes are planned on ZNPP from Nikopol’ city. This “spectacle” will be accompanied by public warnings about rising radiation levels and other “special effects”. The staging is being carried out in order to influence the UN Secretary-General and the international community to cover up decisions favourable to Kiev.

▫️The ultimate goal of the provocation is to create an exclusion zone of up to 30 km, to bring international forces and foreign observers to ZNPP territory, and to accuse the Russian Armed Forces of nuclear terrorism.

▫️As a conclusion based on the above, we would like to draw your attention to the fact that in case of continuation of negative development of the situation related to shelling of the nuclear plant by Ukraine, the issue of putting Units 5 and 6 into “cold reserve” may be considered, resulting in the shutdown of Zaporozhye NPP.