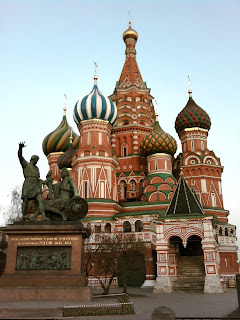 Did you know that Moscow celebrated its 862nd birthday on September 5-6 2009?

Did you know that 66 percent of Russians, think of Moscow residents as a separate category of Russian people? They imagine a Muscovite as a person having a good job, a high income, and fine business qualities. However, when speaking about personal qualities of Muscovite’s, most Russians have negative things to say. 6 percent consider Muscovite’s rude, crude and socially unacceptable.

Did you know that Native Muscovite’s make up only two percent of the population of Moscow about 180,000 people? (Svetlana is a native Muscovite.)

Did you know that Moscow is a densely populated city? There are about 120 people living on each hectare of land in the city limits. For comparison, the density is 40 people in New York, 62 in London, 88 in Paris.

(Link to Article) Facts from Pradva!