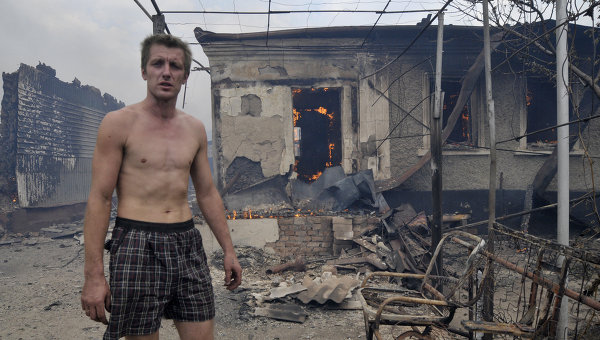 When You have very little as many Russians have and then that is taken from you,  It gets sad…

Wildfires raging in central Russia due to abnormally hot weather have claimed 30 lives, left 2,210 people homeless and caused damages worth over 4.6 billion rubles ($150 million), the Ministry for Regional Development said on Sunday.

The wildfires have affected 14 Russian regions, destroyed a total of 1,875 homes, with the largest destructions observed in the Nizhny Novgorod, Voronezh and Ryazan regions, the ministry said, citing data as of late July 31.

As many as 771 wildfires were registered in the European part of Russia as of early Sunday, including peat bog fires, the ministry said.

Temperatures across much of western and central Russia have topped 35 degrees Celsius (95 degrees Fahrenheit) in the past five weeks, causing peat bog and forest fires and creating what is thought to be the worst drought in the country since 1972.

Russian Prime Minister Vladimir Putin, who visited the fire-damaged Vyksa district in Nizhny Novgorod on Friday, severely criticized local administrations for their poor handling of the fire crisis and said local government chiefs who had failed to cope with the deadly wildfires must resign.

Many residents in the Nizhny Novgorod region, whose houses had been burnt down in the fires, complained to Putin, at the scene to assess the situation, that the actions taken by local authorities were chaotic and uncoordinated.

Putin has ordered a total of 5 billion rubles ($165 million) to be disbursed from the federal budget to the central Russian areas affected by the wildfires.

He said the families of those who died in wildfires would receive 1 million rubles ($33,000) in compensation each. He also said the government would allocate around 3 million rubles ($100,000) for the reconstruction of each burnt house.

The government will also allocate funds to compensate for the loss of personal property.

Russian President Dmitry Medvedev called for the immediate construction of housing for those left homeless by the fires.