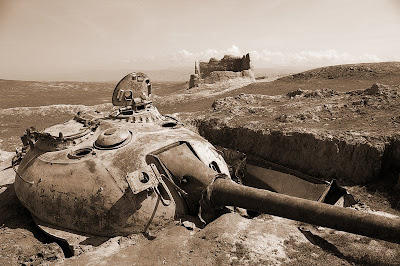 I was thinking about the Soviet Union and the Afghanistan War while drinking my coffee today. It seems that 20 years ago this 15th of February the Soviets left Afghanistan.

Now the comparisons of that war and the one the USA is waging in Afghanistan is ironically similar.

“As Russia marks the 20th anniversary of its withdrawal from Afghanistan, officials in Moscow are warning that US and NATO-led forces are making exactly the same mistakes as the Soviet Union made when it invaded the country in 1979.”

The Military in Russia have stated many times that it seems strange that no one seems to have learned from their mistakes in Afghanistan. There is still plenty of men who fought in that war still alive. This was a war that will never be forgotten by Russians.

But it seems that bad wars can be forgotten and America seems to have pushed aside the nightmare called Vietnam and now they are in two similar wars that will never end.

Now just 20 years later, the Russians are looking with astonishment at the way the US and NATO-led forces are waging their war in Afghanistan.

Russia shakes her head in disbelief as America has now been caught in this vicious circle called Afghanistan.

Russia does not laugh like America did when the Soviet Union was buried in the quagmire called Afghanistan. Russian does not supply Americas and NATOs enemies with money and weapons to fight against them. (Like America did.)