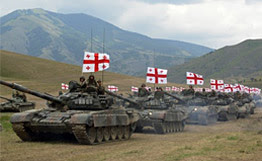 Tell me that Americans are not involved in Georgia Military antics!

Immediate Response 2008, joint Georgian-American military exercises, began July 15 at the Georgian Ministry of Defense training center outside Tbilisi, RIA Novosti information agency reports. A total of 1650 soldiers will take part. Besides Georgians and Americans, members of the armed forces of Armenia, Azerbaijan and Ukraine will participate. The Georgian Defense Ministry stated in a press release that the exercises cost $8 million and are being fully paid for by the Pentagon. (There: our tax money put to good work.)

I knew that Americans are playing in the wrong backyard.