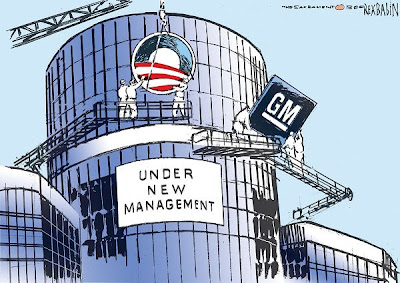 I have watched this deal collapse and watched the sneaky underhanded dealings of GM in these parts of the world. The deal collapsed November 3rd, 2009. Just two days before the final draft was to be signed. I have written before about how pathetic of a company the GM has become in America and now they show the world what they are really made of by backing out on a deal that Germany, Russia and Canadian companies have put together.

German Gref, the Sberbank CEO, said some 9,000 pages of contract had been drawn up over nine months of talks with GM, adding the U.S. automaker (GM) backed out on the deal two days before its planned signing. (Link)

Should we, as Americans be happy about this kind of dealings by an American company?

But truthfully lets not forget that the USA Government really owns GM and that is who is pulling the strings. This is one major reason why the head of GM quit…
GM can not be trusted anymore. There seems to be the workings of a very large lawsuit by Sberbank because they are owed money for supporting the failing company after GM approved the sale…
Windows to Russia!
comments always welcome.