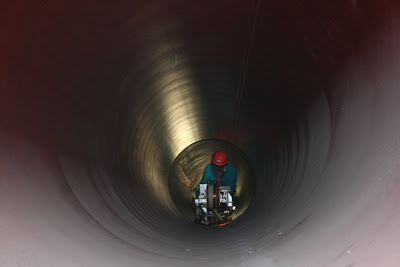 That is an important statement and it looks like Nord Stream is solidly on it way to fullfillment in 2011.

For those of you who do not know about Nord Stream:

Nord Stream is a gas pipeline to link Russia and the European Union via the Baltic Sea. It will carry natural gas to supply both businesses and households. The new pipeline will be an important factor of energy security in Europe.

Nord Stream will transport up to 55 billion cubic metres of gas each year. This is enough to supply more than 26 million households.

Nord Stream is more than just a pipeline. It is a new channel for Russian natural gas exports, and a major infrastructure project which sets a new benchmark in EU-Russia cooperation. (Link to the Home site of Nord Stream!)

To a good video about the pipeline.

Some facts: Nord Stream will be 1,220 kilometers (758 miles) long and will consist of two parallel lines. The first line, with a carrying capacity of around 27.5 billion cubic meters a year is due for completion in 2011. The second line is due to be completed in 2012, doubling annual capacity to around 55 billion cubic meters.

The Nord Stream pipeline, which will pump gas from Siberia to Europe under the Baltic Sea, bypassing East European transit countries, is being built jointly by Gazprom, Germany’s E.ON Ruhrgas and BASF-Wintershall, and Dutch gas transportation firm Gasunie at an estimated cost of $12 billion.
Gazprom has already signed long-term contracts to supply gas through Nord Stream to customers in several EU countries including Germany, Denmark, the Netherlands, Belgium, France and the United Kingdom, Nord Stream AG said on its website.
Transit countries have been so short sighted that they forced these bypass pipelines…
Windows to Russia!
comments always welcome.