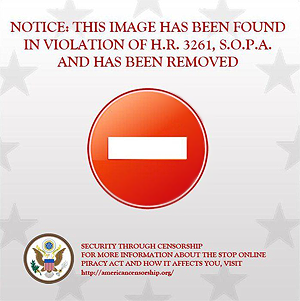 Yesterday was a ride and a half. This time our site was down but not because anyone was after Windows to Russia for once. This time it was the reverse effect and what an effect it had. I felt sorry for our host after I realized what was happening. It was not their fault that huge American companies use them as an offshore hosting to try to get around the USA censorship…

But lets get to the real story:

Federal agents executed a crackdown on the files sharing website Megaupload on Thursday. The response, you could say, was not minor.

Authorities attest that Megaupload, at one point the fifteenth most popular site on the Web, was guilty of costing copyright holders upwards of $500 million in lost revenues because users of the service can easily and freely upload and distribute pirated material. Four people were arrested in New Zealand Thursday as part of the sting, which also yielded the site going offline.

Given that Megaupload boasts an audience of 500 million users daily, a reaction was expected. Only minutes after the Web began digesting the news, that response came by way of thousands of upset users, many aligned to the online collective Anonymous.

The attack started swift and strong and only grew. First fell the website the US Department of Justice, justice.gov. Next was the site for Universal Music Group, a SOPA supporter and the largest record label in America.

Anonymous calls it the single largest Internet attack in its history, and it crippled the biggest sites for the US government and entertainment industry.

To those close to Thursday’s campaign, it not only was a necessity but it was only the first step in a battle that’ll continue for a while to come.

“Obviously, this couldn’t have come at a worse time in terms of the government’s standpoint,” Barrett Brown says calmly from Texas. Speaking to RT from Dallas, the founder of Project PM and frequent Anonymous collaborator says that it is a terrible case of happenstance that federal agents went after Megaupload only hours after the thousands of sites protesting in an anti-SOPA blackout went back online. Web surfers were by-and-far ready to defend an open Internet, and Brown says that the feds “could not have chosen a worst time to take down Megaupload.”

“It was in retaliation for Megaupload,” he says of the attack, which involved thousands of operatives going after numerous sites linked to both the federal government and entertainment industry.

“There are a number of targets, high profile targets, that were taken down,” says Brown. In addition to the sites for the FBI, RIAA, the DoJ and BMI, other assaults were launched against the official site for the White House.

Brown says that the assault will continue though, regardless of the outcome that will befall on SOPA and PIPA in Congress. Speaking of the raid on Megaupload, he tells RT that it illustrates that, “Even without SOPA having been passed yet, the federal government always had tremendous power to do some of the things that they want to do. So if this is what can occur without SOPA being passed, imagine what can occur after SOPA is passed,” he asks.

Brown says that Congress and the feds are not going to give up anytime soon, but their opponents, Anonymous and others, are even more ready for battle.

“This is a war they plan on fighting until the end and so do we,” says Brown.

And according to him, it will only get messier.

“We can expect a great deal of havoc of the sort we saw today. We’re going to see it in a stepped up fashion,” he says. Brown tells RT that it only took 70 minutes for the #OpMegaupload campaign to take hold online and take down the website for the DoJ. As more realize that the fight against SOPA and similar legislation is a fight worth taking sides for, he thinks it will only grow in intensity.

Eventually, says Brown, those advocating for a free Internet will come out on top. Victory, he says, will be an end to any bills in the Senate that have the intent of restricting Web use. “There will be new bills,” says Brown, “that will specifically seek to stop these sorts of things.”

“It’s going to be impossible for us, within just a few weeks, a few days, to prevent any more of these bills to go forward and to prevent things like Megaupload from being raided,” says Brown, “but we can get to that point and it’s a number of steps.”

Those steps, he adds, will lay the groundwork for another mission, an operation going under the banner of #OpDonkeyPunch. With that initiative, says Brown, the Congressman that think that they can support SOPA and keep the dirty industry money handed over by lobbyists will be made an example of.

“Their standpoint is that they’re’ not going to get any retaliation…Now we stand to change that,” says Brown.

*** Remember that car company I told you was on our server also? The big car company? Well our whole hosting company was crashed because of hosting several big American companies websites. This is going to get serious and I am for what is right and the government is not the one that is right…