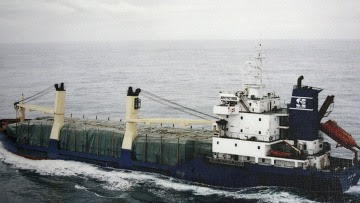 As you know I have been following this story on the Arctic Sea for quite some time now. This poor ship has been through the ringer so to speak and there still is a captain and three crew members who are still on board, along with Russian investigators.

The Russian-crewed and Maltese-flagged cargo ship at the center of a mysterious hijacking case is currently being towed towards Malta and may be handed over on Tuesday, the ship’s Finnish owner said.

“The Arctic Sea might be there as soon as tomorrow, in the afternoon,” said Viktor Matveyev, director of Solchart, which holds 100% in the Maltese firm that owns the vessel.

Matveyev earlier said he would travel to Malta to discuss details of the vessel’s handover.

Matveyev said Malta’s maritime officials intended to examine the ship before deciding whether to allow it to enter the port of Valletta or not.

It has not sunk yet and just might be let into the Maltese port… (Remember I said might, because it has not happened yet!)

Link to Arctic Sea Articles by Windows to Russia!