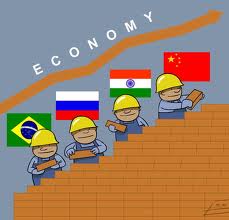 The leaders of the BRICS nations – Russia, China, India, Brazil and South Africa – believe the situation in Libya should be resolved through diplomatic means, Russian President Dmitry Medvedev said on Thursday.

“Like the other BRICS nations, Russia is deeply concerned by events in Libya and the civilian deaths there,” Medvedev said after a BRICS summit in the southern China resort of Sanya.

“Our shared opinion is that the problem should be resolved by political and diplomatic efforts, not through the use of force,” he added.

A statement after Thursday’s summit said the BRICS member states were united in the desire for “peace, stability and progress” in the countries of the Middle East and Africa hit by recent violence that “the use of force should be avoided” in resolving the conflicts.

“We intend to continue our cooperation with the UN Security Council on Libya,” the statement went on. It also praised the African Union mission – headed by South African leader Jacob Zuma – to Libya.

Russia and China – the only BRICS nations with permanent seats on the Security Council – also called for a greater UN role for Brazil, India and South Africa.

The UN Security Council adopted a resolution imposing a no-fly zone over Libya on March 17, paving the way for a military operation against embattled Libyan leader Muammar Gaddafi which began two days later. The command of the operation was shifted from a U.S.-led international coalition to NATO in late March.

Despite dozens of sorties carried out by NATO aircraft against Gaddafi’s forces, the government troops maintain their combat capability and continue to pound poorly-equipped rebels with heavy artillery and rocket fire.

France and the U.K. said on Tuesday that the allies should intensify their efforts to cripple Gaddafi’s war machine.

Gaddafi has accepted an African Union road map to ending the civil war in the North African country, but rebels says they will not back down on their demand that Gaddafi must go.