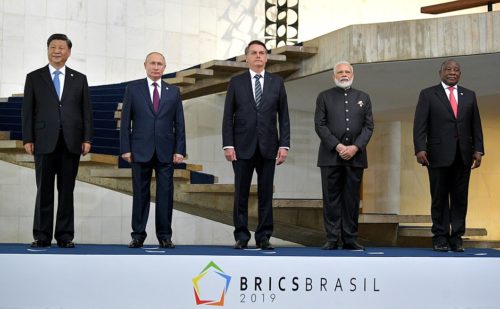 I completely agree with President Bolsonaro’s praise of the work done by BRICS. Over the past 10 years, BRICS has achieved serious results and has gained a reputation as a respected association. At the same time, the coordination mechanisms established within BRICS make it possible to cooperate effectively in politics, security, trade, finance and culture.

It is important that the BRICS countries closely cooperate in addressing global and regional problems. Together we speak in favour of strict compliance with the norms of international law and the central role of the United Nations in international affairs. Our countries promote the influence of developing countries in the global management system, as well the establishment of a more just global order.

The BRICS member states consistently deepen mutually beneficial economic ties, strengthen trade and investment flow and together address such important tasks as industrial upgrading, the introduction of innovation technologies, and improvement in our people’s welfare.

This year Brazil, which is chairing BRICS, has carried out very useful and constructive work in all the areas of cooperation I mentioned. For this, I would like to thank both President Bolsonaro and all our Brazilian colleagues.

Colleagues, as mentioned, starting on January 1, 2020, Russia will chair BRICS. This is why I would like to talk about Russia’s main approaches to the further development of cooperation.

Everything we plan to do will, in one way or another, continue Brazil’s efforts; we will carry on these trends and priorities. We regard among our tasks enhancing the efficiency of BRICS in providing for the continuity of implementing the projects approved in recent years.

Russia’s motto for its BRICS presidency will be BRICS Partnership for Global Stability, Common Security and Innovative Growth. We plan to hold around 150 events at different levels. Apart from the key event, the BRICS Summit in St Petersburg, there will be many meetings, forums and sessions in Chelyabinsk and other Russian cities.

During its presidency, Russia will certainly pay special attention to expanding foreign policy coordination between our states on key international platforms, primarily at the UN where the BRICS countries have good experience of interaction.

We have common positions on a broad range of issues on the UN agenda, such as peacemaking and combating the terrorist threat and transnational crime. We invariably support each other’s initiatives and try to vote in solidarity on major resolutions.

However, it appears that the BRICS nations must show more initiative in taking the lead at the UN. We must more actively and persistently promote a positive international agenda by uniting around us like-minded nations to jointly solve key global and regional problems.

Thus, we consider working out international standards in terrorism prevention and countering the spread of terrorist ideology, including via the internet, to be an urgent issue for the BRICS countries’ interaction at the UN. The Russian presidency is set to closely cooperate with partners on the issues of money laundering and terrorism financing, and the return of illegally obtained assets.

As you are aware, next year marks the 75th anniversary of the Second World War and the establishment of the United Nations Organisation, and our countries could consider the possibility of drafting a joint statement on these landmark events. It is important to condemn attempts to glorify the Nazis and also to firmly stand up for a world order based on international law and the United Nations Charter.

Regarding economic cooperation between the BRICS member countries, during Russia’s chairmanship, we plan to suggest that the group of five economies work together to update the Strategy for BRICS Partnership in Trade and Investment that was approved at the 2015 BRICS Summit in Russia. Indeed, the implementation of this strategy has had a positive impact on economic cooperation between the BRICS member countries in many areas, however, it is time to review and update this document and set new objectives for developing cooperation between various sectors in the BRICS economies for the next five-year period, that is, through 2025.

The main objective of cooperation between the BRICS member countries, as we see it, is to deliver real benefits for people and help improve living standards and the quality of life.

Russia will work to enhance existing BRICS organisations and financial mechanisms – the new Development Bank, as well as the BRICS Pool of Conventional Currency Reserves and its macroeconomic information exchange system. We will continue to work to create a BRICS bond fund in our national currencies. We also plan to come up with new initiatives to expand cooperation between the fiscal, customs and antimonopoly authorities of the BRICS member states. I believe practical work and practical cooperation of this kind will be very useful as it promotes our efforts to achieve our objectives.

We will continue to promote cooperation between the BRICS five-nation group in the energy sector, including efforts to push forward our earlier initiative to create a BRICS energy research platform.

In June, the first ever, and very effective, meeting took place. It was attended by specialists from all five countries. The participants discussed prospects for conducting joint research in the fields of oil, natural gas and energy efficiency.

Of course, we consider culture and people-to-people ties to be another important area of cooperation between the BRICS member states. Next year, we plan to hold a series of cultural events in Russia, including festivals, theatre performances, creativity contests for adults and youth and BRICS sporting events.

We will also continue to do what has been done before, including during the Brazilian chairmanship to promote the activities of the BRICS Network University, expand contacts between academic and scientific centres, research institutions and universities in the five member countries. As for science and healthcare, we are committed to implementing the Clean Rivers of BRICS programme.

In conclusion, I would like to say again that we would be happy to welcome the leaders of the BRICS member states to the next summit in Russia.

Thank you for your attention.