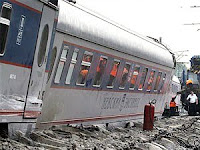 The leadership of the so-called “Caucasus Mujahideens” has claimed responsibility for the explosion that caused the derailment of the “Nevsky Express” train on November 27.

The statement was published on one of the militants’ websites, Lenta.ru reports.

The online news edition says the terror act was one of a series targeting several strategic objects in Russia. The militants are said to have acted on the order of their leader Doku Umarov.

According to the militants, the blast was organized by a special subversive group. They promised to carry on with such acts of terror until “occupants in the Caucasus stop the policy of killing ordinary Muslims because of their religious beliefs.”

In their statement, the militants claim more victims than the official figures – 30 people killed and at least 80 wounded versus 26 and 100 respectively.

Earlier, investigators said they are now searching for several suspects, including four men of Caucasian origin.

The media have also speculated that a “Russian Wahhabi”, Pavel Kosolapov, could be linked to the explosion. Kosolapov is a Russian serviceman taking the militants’ side.

Kosolapov has been put on a wanted list after he was charged in absentia with a terror explosion that derailed the same train back in 2007. The Prosecutor’s Office believes two years ago the terror act was organized by Doku Umarov. Meanwhile, there has been no official confirmation of Kosolapov’s involvement in the latest blast.