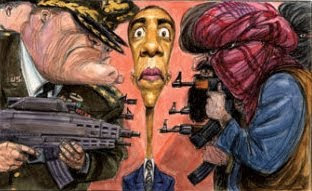 Want to know what is being said in the press on this side of the world about Obama and more troops to Afghanistan? It really is very simple:

The only truth in what Obama has done is to increase military presence in a lost war. The Taliban will now increase their war efforts to match Americas and NATO’s involvement. Also since America seems to be so bent on buying off the Taliban through a financial progam – like they did in Iraq. We will guarantee that they have financial support to continue war against us…

The war to the Taliban is about draining a big, bad, tough and rough countries resources plus finances. For that is how they will try to topple America! (Seems they (Taliban) are winning the war!)

The rest is a bunch of baloney…

PS: Has anyone figured out that the Taliban are not scared of the US? I added a very good video by the way!