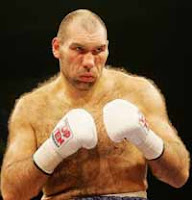 Evander Holyfield, at the age of 46, will seek to win back a major heavyweight title when he fights Russian giant Nikolai Valuev for the WBA crown next month.

The fight will take place Dec. 20 in the Hallenstadion in Zurich, Switzerland, arena management announced.

Holyfield has not fought since losing an unanimous decision to then-WBO champ Sultan Ibragimov a year ago. The fighter from Atlanta known as the “Real Deal” has a 49-9-2 career record and insists he wants to keep fighting until he regains the title again.

The 7-foot, 330-pound Valuev – once referred to as the ‘Beast from the East’ but now preferring ‘The Russian Giant’ – won a unanimous decision over Ruiz in August to claim the vacant WBA crown.

He told the Zurich tabloid Blick on Thursday that he was excited to face Holyfield.

“I’m taking this fight very seriously,” said the fighter with 49-1 record and 34 knockouts. “Holyfield is a strong opponent … Ten years ago I would not have dreamed of getting into the ring with this champion.”

The fight will be the biggest in Zurich since 1971, when Muhammad Ali knocked out Juergen Blin of Germany in the 7th round.