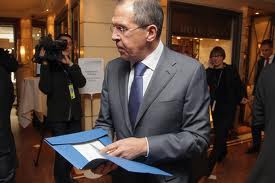 Violation of international law by NATO threatens the world order, says Russian Foreign Minister Sergey Lavrov. The Minister also proposed to conclude a “peace pact for Europe”, suggesting that this may serve as a starting basis, as he pointed out that the issue of European missile defense threatens to divide the branches of European civilization…

On Saturday in Germany, opened the 48th Munich Security Conference. Russia was represented by her country’s Foreign Minister Sergey Lavrov.

One of the main focus of the Minister made on the task of creating a Euro-Atlantic space of equal and indivisible security. According to him, Europe needs a peace pact, and they can become a European Security Treaty . “Europe needs a peace pact, an end to the era of the Cold War, as a broad co-operation can only be built on a platform of trust, – the Minister said. – As we all remember the famous Russian-American wisdom, “trust but verify” Such a pact should be legally binding. “

According to him, “the term would be to work towards building a common security space extensive, consisting of connected in” ring “of the regional segments, whose members were linked to the complex legal and political obligations.” “One of these segments would be the area of ​​the girth of our proposed Treaty on European Security (OSCE participating States), within which it would be very helpful to political cooperation between NATO and the CSTO, in favor of what we stand for many years, but never can achieve a clear answer, “- said the Minister.

Speaking about Russia’s role in global processes, Lavrov pointed out that on the world map there is another area that has such massive potential for economic development. “I mean, first of all, the translation of the Russian economy on the innovation track the use of this work, vast opportunities of Siberia and the Far East” – the minister said, adding that Europe should be interested in the success of this project – just as it had supported in his during the reforms of Peter the First.

According to “Interfax” , referring to the actions of external actors in relation to intra-state conflicts, Lavrov said: “The military-political instability in certain regions should not become a” magnet “for the application of force in terms of weakening the usual leverage the leading states to international events “. “Supporting one side of the internal conflict, the attempt to impose outside political structure of the scheme – a dangerous path leading to the expansion of areas of instability and enhance the elements of chaos in international relations. The examples are not far to seek, “- said the Minister.

“It is not advice from outside”

As the political situation in Russia, Lavrov said that the democratic process in the country should be dictated by internal needs, rather than outside advice. “Again and again the thesis of” incorporation “of Russia in the” advanced West “without developed traditions of centuries of foreign policy independence of our country: the pace and nature of democratic processes in our country will be dictated solely by internal needs, rather than outside advice,” – said Lavrov, adding that Moscow does not consider it justified a cautious, even suspicious, the attitude of European partners to the steps and plans for the development of Eurasian integration.

According to him, the decision of Russia, Belarus and Kazakhstan set an example for the deepening of integration processes in the post-directed “to expand the horizons of mutual cooperation.” Lavrov said that now “there is a relative narrowing of the impact and opportunities for countries that are usually referred to the historic West, the weakening of their role as the” engine “of global development.” “I do not want to say that Russia is experiencing in this regard some gloating, not least because the EU – our main trade and economic and investment partner,” – the minister said.

In addition, as reported by ITAR-TASS , Lavrov said that Russia will not participate in schemes that have the purpose of containment of China, “which is our good neighbor and strategic partner.” “The alignment of the opposing alliances – a recipe for the last period, which in modern terms could result in slippage to global catastrophe, – the Minister.

“The threat is the military position of NATO”

In his speech, Lavrov touched upon cooperation with NATO. In his words, Russia considers a threat from an alliance violation of international law and jurisdiction. “Russia does not mention the threat of NATO expansion – said the Minister. – Threat of war is NATO’s position that violates international law and jurisdiction. ” According to the Ministry of Foreign Affairs, “Russia sees this as a threat not only for themselves but also for the general world order.”

In this case, said the minister, Russia still can not get agreement from NATO the term “substantial combat forces” that the alliance has promised not to place on the territory of new members. “Military Infrastructure (NATO) is approaching us fast enough, despite the commitment after the collapse of the Soviet Union, NATO is not that the infrastructure will be located on the territories of new NATO members. So my question is regarding the elements of the missile defense system, whether it is covered under the scope of this obligation or not? But all our attempts to start a discussion in NATO, how big should these combat forces to become significant, does not succeed. NATO does not want to discuss it, “- continued the Russian Minister.

In this connection Lavrov sees no serious progress in the negotiations between Russia and the U.S. deciding missile defense system in Europe – European missile defense. The Minister stressed that in recent years we are talking about consultation, not full-fledged negotiations. Russia and NATO have agreed to cooperate on the draft European missile defense at their summit in Lisbon in 2010, but negotiations stalled over the refusal of Washington to confer legal security of the system being deployed not directed against the Russian deterrent. In late November last year, Russian President Dmitry Medvedev has announced a package of measures of military-technical and diplomatic nature that Russia will respond to the deployment of a missile defense system in Europe.

Lavrov said that Russia “welcomes all efforts to restore confidence” between the two countries and welcomed the publication of an international commission of experts of Euro-Atlantic security initiative (Euro-Atlantic Security Initiative, EASI). The Commission proposed an action plan to overcome the disagreements between Russia and the U.S. security, as well as the convergence in this area of ​​Russia and NATO. The report was presented on Saturday in Munich.

During the discussions, “the margin” of the conference we were talking about the situation in Syria . The Minister recalled the appeals of Russia to the United Nations to prevent slippage of the situation in the country to civil war. “We fully support the peaceful protest demonstration in Syria, but the armed opposition uses them for its own purposes, – Lavrov said.

In Moscow, he said, there are no special concerns of Syrian President Bashar al-Assad, but there is concern about security in the world. “We’re not friends Assad, just as we were not friends of Colonel Gaddafi – said the head of the Russian Foreign Ministry. – But we do not accept claims to unilateral sanctions, which are taken without consultation with us, and especially the extra-territorial sanctions order. “

Concerning the Moroccan draft resolution in the UN Security Council, Foreign Minister stressed that Russia insists on the removal of ambiguities in the text. “We must … remove all ambiguity in the text of the resolution – said Lavrov. – Vnutrisiriysky dialogue should be conducted without preconditions. ”

According to him, in the Western draft resolution to a much greater degree of condemnation of the Syrian government than the opposition, and claims must be presented to both sides of the conflict. “Otherwise, we’ll take completely unrealistic, or position, or will submit a signal that the Security Council clearly takes one side in the Civil War,” – said the Minister.

The second drawback of the Western draft resolution, said Lavrov, is that on the one hand, it offers the Syrians to begin negotiations without preconditions, without having to prejudge the outcome, but, on the other hand, states that this dialogue will be conducted according to the schedule proposed by the League of Arab States (LAS). “Of course, the schedule of PAH should be taken into account, but you have to remove the contradiction between the requirement to carry out this chart at 100% and position on the inadmissibility prejudge the outcome” – he said.

Commenting on the supply of Russian weapons to Syria, Lavrov assured that they will not affect the balance of power in the Middle East region. “Whatever we sell Syria – this did not change the balance of power nor to the” Arab spring “, it does not affect the situation in the country, what we deliver – it’s not small arms, this is not what is used in the conflict” – he said.

The Munich Conference was founded in 1962 by German journalist Ewald von Kleist as a “meeting of defense officials,” the NATO member countries. Since 1999, it also involved political and military leaders from Central and Eastern European countries and representatives of the business. Users browsing this forum brings together an international panel of about 40 countries. The conference agenda includes the issues of combating international terrorism, UN reform and NATO, the resolution of the situation in hot spots, strengthening regional and global security.

In 2007 at the Munich conference with a keynote speech on foreign policy, which caused a huge international response by the President of Russia Vladimir Putin. The Forum is traditionally held numerous informal meetings, during which promising ideas being discussed in international security.