Europe Needs to Help Build a New Bridge (Ukraine) With Russia About Gas! 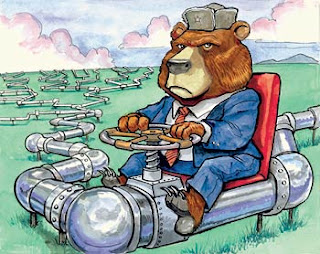 I was drinking my morning cup of coffee here in Moscow, Russia. I was doing some thinking about the Russia – Ukraine – Europe gas situation. While Obama is trying to build bridges in the Middle East and the Western news can only concentrate on that event. Russia is and has been for years now, trying to figure out how to build a bridge to the European Union and keep Ukraine from pulling the pilings out from under the bridge.

The Western press nor the Western Governments – have hardly acknowledge the problem that Russia has been trying to be very front and center about. Then – when Ukraine does not pay her bills, the Western press will start in spouting about “Bad Russia!”

How serious is it going to get?

“No one in Russia is intending to rejoice or gloat over Ukraine’s difficulties in paying for the product it receives from us,” Putin said in Helsinki. “But we cannot pay for this either.”

Putin also said: “I want to stress that without pumping gas into its underground storage facilities, Ukraine won’t be able to survive and will be forced to tap gas from its export pipelines. It will be forced to do this, you can’t even blame them for it.”

Putin also expressed: “We have intensified monitoring over the transit of Russian gas to Europe,” he said. “This monitoring shows that, unfortunately, Ukraine has so far not begun pumping gas into underground storage facilities. This may create problems with gas deliveries during the wintertime.”

This is not something to take with a grain of salt. Putin is trying to let the world know that Winter is coming and Ukraine has no gas in her storage. That is about 5 billion dollars of gas that has been sold and lost.

I have already posted about this up and coming issue. Russia: The Murmurings of a Ukraine Gas Row are Beginning!

Europe knows that this is a problem and looking the other way will not make Ukraine a good transit partner.

I hope that the people in Ukraine who have taken the gas money and squirreled it away in hidden bank accounts are happy. The citizen of Ukraine has paid their gas bills and they know who takes their money.

Ukrainians deserve an honest government to take care of them…