The draft of the European Security Treaty has been published. 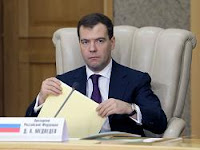 On June 5, 2008, the President of Russia put forward an initiative to develop a new pan-European security treaty, the main idea of which is to create – in the context of military and political security in the Euro-Atlantic region – a common undivided space in order to finally do away with the Cold War legacy. In view of this Dmitry Medvedev suggested formalizing in the international law the principle of indivisible security as a legal obligation pursuant to which no nation or international organization operating in the Euro-Atlantic region is entitled to strengthen its own security at the cost of other nations or organizations.

Based on the results of discussions that have taken place in the last year at various venues, Russia had prepared a draft European Security treaty. The Russian President has sent this draft to the heads of relevant states and to chief executives of international organizations operating in the Euro-Atlantic region such as NATO, the European Union, the CSTO, the CIS, and the OSCE. Dmitry Medvedev emphasized that Russia is open to any proposals on the subject matter of its initiative and counts on the positive response from its partners and the beginning of a substantial discussion on specific elements of the draft treaty, which text is given below.

At a meeting with the representatives of German political, parliamentary and public circles, the President of Russia suggested developing a legally binding treaty on European security. June 5, 2008, Berlin
Russia-EU Summit in Nice. November 14, 2008
Speech at Helsinki University. April 20, 2009
Address to the 64th Session of the UN General Assembly. September 24, 2009
Speech at Serbian National Assembly. October 20, 2009, Belgrade