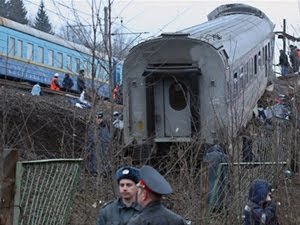 “Preliminary evidence suggests that it was an explosion of a homemade device, equivalent of seven kilograms of TNT,” said Russian Federal Security Service chief Aleksandr Bortnikov.

A spokesperson for the Russian Investigative Committee, Vladimir Markin, added some more details regarding the blast.

“We have found a 1.5-by-1-meter hole at the train crash site, and also the remains of an unidentified explosive,” he said. Markin noted that the accident, which has left 26 dead, is almost certainly an act of terror. (Read More)