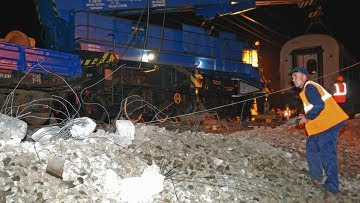 Russian state radio and TV said the crash occurred 280 km (174 miles) from St. Petersburg at 9:38 p.m. (12:38 p.m. ET). Rescue workers were trying to free people trapped under the carriages of the Nevsky Express that overturned.

Update:
MOSCOW, November 28 (RIA Novosti) – Twenty-five people died in the derailment of a Nevsky Express train that could have been a terrorist attack, and 95 were injured, according to the latest data from the Russian health minister.