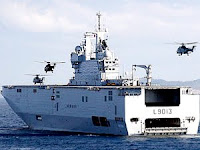 France has agreed to sell the Mistral helicopter carrier to Russia. The Russian Navy also has its eyes on three more similar vessels in the future.

The approval of the defense deal was announced Monday by Jacques de Lajugie, the international development director of France’s armaments board Delegation Generale pour l’Armement (DGA). He added the possible addition of three more helicopter carriers has only been discussed on the technical level, not on the political.

Russia’s Navy voiced its intention to buy a helicopter carrier last year. The goal is to study the technology and tactical advantages of such a ship.

The French warship Mistral is the main candidate for the purchase, and she even paid a three-day visit to St. Petersburg in November so that top brass could examine it personally. However, the final decision has not yet been made and Russia is considering alternatives.

France currently has two vessels of this class deployed, which means additional warships will have to be commissioned if Russia wants an extra three. Some Russian Navy officials also speculated that the Mistral can go with a license to build similar vessels in Russian shipyards.

Hummmmm! That was not surprising to me and most on this side of the world but now lets see what good ole America prints about this predicament…
Windows to Russia!
comments always welcome.
PS: My last article about this subject: It is None of Our Beeswax: Russia Wants A French Mistral-class Assault Ship!
MENU