NATO Wants Russia to Believe – but Russia Does Not Believe in NATO! 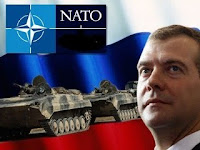 “NATO is not an enemy of Russia,” NATO Secretary-General Anders Fogh Rasmussen said in an interview on the sidelines of a security conference in Munich.

Russia does not believe NATO:

President Dmitry Medvedev signed into approval his country’s new military doctrine Friday. The doctrine identifies one of the “main external threats of war” as NATO’s expansion east to Russia’s borders, and it sees U.S. plans to create an anti-missile shield in Europe as a concern for national security. It also reaffirms Russia’s right to use nuclear weapons if the country’s existence is threatened.

Why is this? Because the lies run deep! Russia has learned what my Grandma always said, “Only believe half of what you are told, the other half is a lie!”