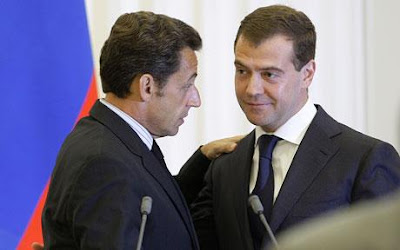 French President – Sarkozy told U.S. Defense Secretary Robert Gates at a brief meeting on Monday that in his opinion the sale did not pose a military problem because Russia should be treated as a real partner. “One cannot expect Russia to behave as a partner if we don’t treat it as one,” Sarkozy said.

NATO is in Moscow right now and this subject is sure to cause a few rumbles. NATO wants Russian help but wants it on NATO terms. So just days after NATO and Russian officials clashed at the Munich Security Conference, a group of prominent experts from the NATO alliance is to arrive in Moscow on Tuesday. (Feb. 9th 2010)

The Western press lit up with astonishment over the fact that France sold this ship to Russia! It seems that all the previous letters and demanding statements from America and NATO did not curtail the sale. The opinion type articles, about how Russia can use this craft for evil and destructive intentions to control the world at large has flourished in the media and still evince the networks.
Now lets see what else can Russia buy, to have more NATO toys to play with…
Windows to Russia!
comments always welcome.
PS:

“French Defense Minister Herve Morin said on Monday it was time to turn the page on Cold War-era antagonisms with Russia and start a new relationship with Moscow through new exchanges.”