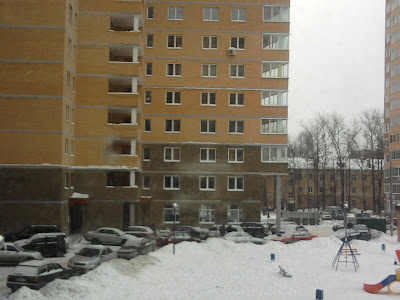 The playground is a clear as it is because the kids pack the snow even tighter. The park bench is getting ready to go under. The train floats on the surface.

I find it interesting how American press has just gone crazy on the snow in East Coast America. As I sit here in Russia and watch it snow again and again! I would say out of the last 60 days it has snowed 55 of those days. The multiples of feet of snow is packed down to about a foot and a half. It is like a solid sheet of ice now. All areas can virtually be transversed safely (pertains to not sinking out of sight) because the surface is like rock. The sidewalks are sometimes two feet higher than in the summer and stepping off the side walk can be a very dangerous proposition. The work crews have big metal rods with a strong steel blade on the end and they chop for hours trying to clear a path for people to walk. My favorite thing is when they chop a set of stairs from the road surface to the sidewalk. Sometimes it can be several stairs high…

I would imagine that the people who live in Michigan and the Dakotas plus other states in America really wonder what is wrong with some people at times! I have friends in the North part of America, that are use to having so much snow that their car disappears every year and they never complain about the snow. (Really it seems to me that the normal people are not really complaining, but that the Government and press are making a big deal out of it?)
The big difference is that in America the snow melts, except maybe the farthest North areas. In Moscow Russia the snow just keeps getting deeper. We have what seems to be about 6 months of Winter. The temperature just never goes about 0 degrees for months and months…
I never realized what snowpack was about because I do not ski, but now I know. Most snow that I have seen in the Midwest America was heavy and deep but within a week it was gone and ready for the next snow…
I said to Svetlana the other day, “Either I am getting taller or all these trees and road signs are getting much shorter!” As a tree limb was trying to poke me in the eye that in summer would have been at least two feet above my head. 🙂
Boza loves it because he can dig anywhere (He has a lot of terrier in him) and not get in trouble. He likes to dig as fast as he can into the packed snow, throwing ice everywhere. Then he sticks his head way down into the hole he dug and growls at what ever imaginary creature he is digging for. Then he runs and digs another hole. So far, he never hits dirt and when he does, I will know Spring is coming.
As I sit here writing this and the snow falls outside…
Windows to Russia!
comments always welcome.