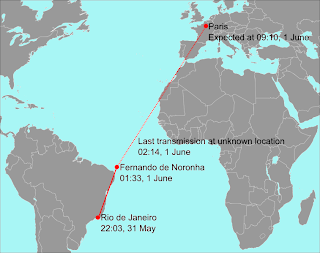 I was drinking my morning cup of coffee here in Moscow, Russia. I was thinking about the Air France Flight 447!

They can not find it, that sounds so impossible in this world today. What with all the satellites and surveillance that the world has.

Then you stop and realize that even though we say this is a small world because of the World Wide Web (WWW), you then after thinking a minute realize that it is a big ocean and a deep ocean.All of a sudden the world becomes a big place again. When something like this happens.

Air France Flight 447 carried 12 crew members and 216 passengers, a mix of nationalities: 61 French citizens and 58 Brazilians, but also nine Chinese, nine Italians, six Swiss, five British, five Lebanese, four Hungarians, two Americans, one Russian and others from a total of 32 countries, from Estonia to Gambia to Morocco to the Philippines.