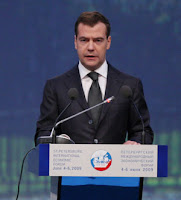 Grab a cup of coffee and have a read:

This is Medvedev’s opening speech – June 6, 2009 in St Petersburg, Russia.

This forum has very historical significance to the world. It is the first World Grain Forum and is being organized by Russia.

Experts say grain consumption by 2030 will grow by 30-40% in the years to come and if the situation is not taken seriously now, that the future is bleak indeed for the people on Earth.

First and foremost, I naturally want to welcome you to St Petersburg and to thank for having come here to discuss one of the most pressing problems we face today.

I am certain that the discussions in the Forum’s various venues today will be productive, since solving the problems of the grain market is one of the most important ways of ensuring food security on our planet. And though this may sound immodest, I think it was a good idea to gather everyone together to discuss this subject. When we proposed this idea – it was at the G8 summit last year – no one anticipated that the discussion of food security issues would be taking place during a financial crisis, but that makes what we will be discussing today more important rather than less.

The grain sector of the agricultural industry is a traditional and very significant source of revenue for our country. We intend to strengthen our position in the world grain market, in both the financial and the organizational sense. In recent years Russia really has regained its status as a major grain exporter, and as far as wheat exports are concerned we are in the top three.

Our country is indeed the largest in terms of territory – it has 40 percent of the world’s black earth [black soil with a very high percentage of humus]. In total we have about 9 percent of world’s reserves of arable land, and of course this gives Russia a unique competitive advantage. We now have the opportunity to put back into operation some 20 million hectares of arable land that have not been used since the radical change in our nation’s economic life took place.

However, providing the world with grain is not simply a question of food security. It is also a very complex social issue that affects stability in various regions of the world. In addition to discussing greater international cooperation in this field, which I consider essential, the principal task of the Forum should be a profound analysis of what is currently happening in grain markets. In effect there are three crises – financial, food, and energy – that are unfortunately not only linked to one another but also capable of creating a very nasty synergistic effect.

We are all concerned about the problems of mass hunger and malnutrition. They remain one of the most difficult tests for humanity. It was this threat that occasioned one of our key Millennium Development Goals, reducing hunger in the world. Today there are a total of one billion hungry people in the world. Just think for a minute about what that figure represents! Every sixth person on the planet goes hungry. The civilized world no longer has the right to continue to ignore this situation. To put it bluntly, many of us today simply accept the fact that every five seconds a child dies of hunger on our planet. The world is increasingly concerned with revenues and profits. And that is obviously immoral.

Medvedev has been on a roll lately. He is pushing a new world currency to replace the dollar and now pushing for Russia to become a leader in feeding the world. The agriculture business in Russia is growing leaps and bounds. It has finally started to recover from the near death blow of the Soviet Union collapsing. Russia is putting back into use, unbelievable amount of land that went dormant during the Soviet fall.