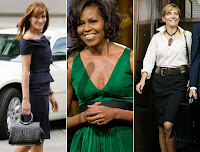 I was drinking my morning cup of coffee here in Moscow, Russia and was thinking about the flood of news over the last few days about the G20. I am going to give you a few links of the thousands of links that the Western Press feels is important G20 news.

The G-20 summit seems it is about two things:

1. looking important while trying to “Fix The World” and
2. showing off your hot stylish wife!

The Western press amazes me. Here are huge headlines from the G20 Summit:

Michelle Obama, Karl Marx and the secrets of the G20 First Wives’ club!

Michelle Obama Finds Her Role on the World Stage!

The Queen and Mrs. Obama: A Breach in Protocol!

Exclusive Photos: Behind the Scenes With the Obamas!

Forget the G-20, what are the spouses wearing?

Would you like a few thousand more? (These are not rinky – dinky sites but main stream news)

I also found an occasional story about riots and also how Obama and Brown consider this an “Historical” moment in history. No one else thinks it is historical, but as long as they do – That is what counts!

But the G20 leaders paled in comparison to the attention that was lavished up on the wives of the Leaders of the Free World.

I see a lot of money was spent and a lot of money is going to be spent. “The G20 leaders who met in London on Thursday agreed to allocate $5 trillion by the end of 2010 to resolve the global economic crisis, with one-fifth of the funds going to the International Monetary Fund and other financial institutions.”

As the words that are coming from Russia say: “The World does not have that kind of money and money will only be spent if there is a complete restructure of the IMF which is owned by America!” The false unified front that was presented at the G20 was fun while it lasted but leaders will go home and get behind closed doors in meetings. Then decisions will be made that they feel like will befit them.

Just a video of the feelings from Russia about the G20…

Windows to Russia is done with the G20 with this post and now we get to play with NATO! 🙂