From Russia: North Korea and Her Musical Satellite! (WMD?) 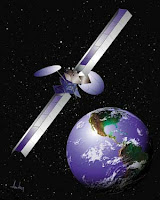 The first articles stated that North Korea had launched their missile. But after it did not destroy Japan, (as feared) it successfully put a satellite in orbit that is now transmitting data and revolutionary songs to praise the communist regime’s current and former leaders. 🙂

At this time it has become a rocket in the Western press. But still this is a bad thing, according to Obama. You see South Korea wants deadly and drastic action taken immediately against North Korea. So Obama has come out with his words of wisdom to hurt North Korea’s feelings.

Obama said that North Korea could not be considered as a full-fledged member of the international community until it gave up attempts to create mass destruction weapons.(Link)

I see that the West does not appreciate North Korean Revolutionary Songs!

So Russia has had to make a called for restraint from the USA, Japan and South Korea after North Korea launched a long-range rocket. So while South Korea has called a special meeting to express their hate for the North end of their world. America has joined the band wagon and Obama is leading the way to sowing the seeds of hate and contempt toward North Korea and their musical satellite.

Russia just gets amusement from America and her antics.

PS: WASHINGTON (AFP)–The U.S. military on Sunday disputed North Korea’s claim it had launched a satellite into space, saying ‘the payload itself landed in the Pacific Ocean.’ So no Music for us to listen to? That is sad for North Korea but I can say that America is happy. The news has gone crazy with the failed attempt.