From Russia: Lets Talk About a Run on the Ukraine Banks! 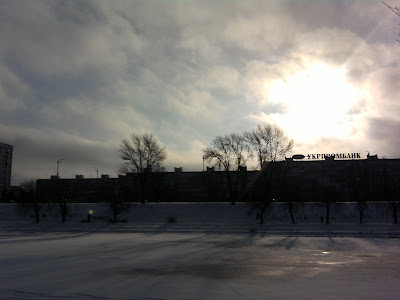 As close as I could get with a form of camera to bank. You can not see them but the people are lined out the door and down the street…

I was drinking my morning cup of coffee and thinking about what I went through on Friday to acquire American dollars in Ukraine. I had to come up with only American dollars to satisfy officials.

Four months ago I could have withdrawn the money from an ATM. Not now! My card I carry is in dollars but not a single machine would dispense dollars. All I could get was Hryvnia the local currency but the higher ups in Ukraine did not want that they wanted $ Dollars.

So I went to a bank: Now in Kiev Ukraine there is a bank on every corner and two or three banks in between. There is no lack of a sign proclaiming to be a bank. But as I found out most are just little cubby holes that just desire to be a bank. These banks had hoards of people lined up and taking out money. But none of these small banks had any dollars.

After much effort in overcoming my Ukraine language abilities, I was directed to a large bank. The bank pictured above a huge bank that will be lucky if it survives much longer. I put camera away and got in line for a several hour wait.

There was many security guards on the outside of the bank and once inside the security situation doubled. I stood in line another hour once inside and went through three metal detectors. They looked for any excuse to toss people out the door so as to cut back on the run on the bank. From what I saw people had every form of container and package to hold their money and it looked to me like they were taking their life savings out.

I new the bank had dollars because I saw a official looking man put what looked like $100,000 dollars in a brief case. This man had two body guards and they walked to the front of the line pushing us pathetic people out of the way. 🙂

My turn came and the initial response was no dollars. I then became the very dumb American and did not understand what they said to me. I went completely dumb! The woman kept rattling words at me and I kept saying: I am American and I want dollars! (Я американский и я хочу доллары!)

She gave up and went and got her boss, that lady tried to talk to me and I gave tha

t bewildered dumb look. She gave up, sighed and gave me my dollars.

I really wanted to say that your government wanted the dollars, not me but I was pressing my luck now. I had my dollars to finish the transaction, so I quietly escaped.

I have smelled fear and panic many times in my life and as I left the bank that is the memory that stayed with me. “The smell of fear from the people!”

I had my prize but I wondered about all the other people that are being demanded to pay in dollars. Seems unfair to me…

A strange fact in many governments: They like to be bribed and payed in American dollars. The hundred (100) dollar bill brings smiles to official faces. In Russia I have never had to pay except in Rubles. I like that…