From Russia: Dmitry Medvedev and President of the USA Barack Obama had a Telephone Conversation! 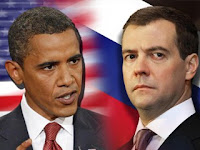 D. Medvedev congratulated B. Obama on officially taking on the duties of head of state, and wished him success in this high office.

During the telephone conversation both parties expressed their intention to focus their efforts on renewing the potential of the Russian-American relations, and on resolving issues in a constructive way, including those where their opinions currently differ.

Their conversation also touched on the necessity of developing cooperation and coordination between Russia and the USA in dealing with most important common challenges such as overcoming the global financial crisis, ensuring a reliable system of preventing the proliferation of weapons of mass destruction, the fight against international terrorism, etc.

Pooling of efforts is also required in the resolution of delicate regional problems – such as that in the Middle East, and that of Afghanistan.

All these issues are part of the broad agenda for the bilateral meeting between the Presidents of Russia and the USA which is scheduled for the near future. (Link)