From Russia: Second Wave of Financial Crises or Not? 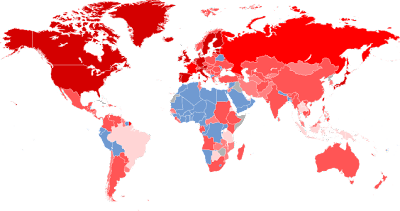 ██ Countries with economic slowdown of more than 1.0%

██ Countries with economic slowdown of more than 0.5%

██ Countries with economic slowdown of more than 0.1%

Lets talk a moment over a cup of coffee about the financial crises in Russia:

It seems that all the press has picked up on is a statement by Finance Minister Alexei Kudrin saying that “A second wave of the financial downturn was expected in connection with debt repayment problems faced by the real sector.”

Deputy Economy Minister Andrei Klepach said his ministry had a different way to express the issue. At almost the same time, Klepach said. “We do not expect a second wave of the downturn. There is a risk of a second negative wave due to the shrinking domestic demand and the lack of loans, but there is also a chance to avoid that.” Klepach said.

The second statement by Klepach is closer to what Kudrin means. It seems that Kudrin was giving a warning to all that if we ride on our laurels it will be possible to be caught by the next wave of of a possible downturn. Kudrin also said,that the government did a good job and it was a close call as Russia crept to the edge of disaster. But Kudrin is trying to tell Russia that we can not act like all is better yet…