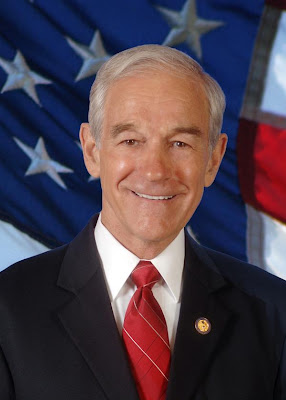 Out of My Norm: I have to post this speech from who I would have voted for and how I will vote this election. I was sadden that Ron Paul would not be one that I could vote for. For I feel that he is the best choice by far….

This is his opening statement from his speech today September 10th, 2008!

The American Majority: By Ron Paul

The argument that the two parties should represent opposed ideals and policies, one, perhaps of the Right and the other of the Left, is a foolish idea acceptable only to the doctrinaire and academic thinkers. Instead the two parties should be almost identical, so that the American people can ‘throw the rascals out’ at any election without leading to any profound or extensive shifts in policy. – Carroll Quigley – Author of Tragedy & Hope

The coverage of the presidential election is designed to be a grand distraction. This is not new, but this year, it’s more so than ever.

Pretending that a true difference exists between the two major candidates is a charade of great proportion. Many who help to perpetuate this myth are frequently unaware of what they are doing and believe that significant differences actually do exist. Indeed, on small points there is the appearance of a difference. The real issues, however, are buried in a barrage of miscellaneous nonsense and endless pontifications by robotic pundits hired to perpetuate the myth of a campaign of substance.

The truth is that our two-party system offers no real choice. The real goal of the campaign is to distract people from considering the real issues.

Influential forces, the media, the government, the privileged corporations and moneyed interests see to it that both party’s candidates are acceptable, regardless of the outcome, since they will still be in charge. It’s been that way for a long time. George Wallace was not the first to recognize that there’s “not a dime’s worth of difference” between the two parties. There is, though, a difference between the two major candidates and the candidates on third-party tickets and those running as independents.

The two parties and their candidates have no real disagreements on foreign policy, monetary policy, privacy issues, or the welfare state. They both are willing to abuse the Rule of Law and ignore constitutional restraint on Executive Powers. Neither major party champions free markets and private-property ownership.

Those candidates who represent actual change or disagreement with the status quo are held in check by the two major parties in power, making it very difficult to compete in the pretend democratic process. This is done by making it difficult for third-party candidates to get on the ballots, enter into the debates, raise money, avoid being marginalized, or get fair or actual coverage. A rare celebrity or a wealthy individual can, to a degree, overcome these difficulties.

The system we have today allows a President to be elected by as little as 32% of the American people, with half of those merely voting for the “lesser of two evils”. Therefore, as little as 16% actually vote for a president. No wonder when things go wrong, anger explodes. A recent poll shows that 60% of the American people are not happy with the two major candidates this year.

This system is driven by the conviction that only a major party candidate can win. Voters become convinced that any other vote is a “wasted” vote. It’s time for that conclusion to be challenged and to recognize that the only way not to waste one’s vote is to reject the two establishment candidates and join the majority, once called silent, and allow the voices of the people to be heard.

We cannot expect withdrawal of troops from Iraq or the Middle East with either of the two major candidates. Expect continued involvement in Iran, Iraq, Afghanistan, Pakistan and Georgia. Neither hints of a non-interventionist foreign policy. Do not expect to hear the rejection of the policy of supporting the American world empire. There will be no emphasis in protecting privacy and civil liberties and the constant surveillance of the American people. Do not expect any serious attempt to curtail the rapidly expanding national debt. And certainly, there will be no hint of addressing the Federal Reserve System and its cozy relationship with big banks and international corporations and the politicians.

There is only one way that these issues can get the attention they deserve: the silent majority must become the vocal majority.

This message can be sent to our leaders by not participating in the Great Distraction—the quadrennial campaign and election of an American President without a choice. Just think of how much of an edge a Vice President has in this process, and he or she is picked by a single person—the party’s nominee. This was never intended by the Constitution.

Since a principled non-voter sends a message, we must count them and recognize the message they are sending as well. The non-voters need to hold their own “election” by starting a “League of Non-voters” and explain their principled reasons for opting out of this charade of the presidential elective process. They just might get a bigger membership than anyone would guess.

Write-in votes should not be discouraged, but the electoral officials must be held accountable and make sure the votes are counted. But one must not be naïve and believe that under today’s circumstances one has a chance of accomplishing much by a write-in campaign.

The strongest message can be sent by rejecting the two-party system, which in reality is a one-party system with no possible chance for the changes to occur which are necessary to solve our economic and foreign policy problems. This can be accomplished by voting for one of the non-establishment principled candidates—Baldwin, Barr, McKinney, Nader, and possibly others. (listed alphabetically)

Yes, these individuals do have strong philosophic disagreements on various issues, but they all stand for challenging the status quo—those special interest who control our federal government. And because of this, on the big issues of war, civil liberties, deficits, and the Federal Reserve they have much in common. People will waste their vote in voting for the lesser of two evils. That can’t be stopped overnight, but for us to have an impact we must maximize the total votes of those rejecting the two major candidates.

For me, though, my advice—for what it’s worth—is to vote! Reject the two candidates who demand perpetuation of the status quo and pick one of the alternatives that you have the greatest affinity to, based on the other issues.

A huge vote for those running on principle will be a lot more valuable by sending a message that we’ve had enough and want real change than wasting one’s vote on a supposed lesser of two evils. (Via Campaign for Liberty)

From an American and his wife in Russia,
God Bless & Thank You Ron Paul