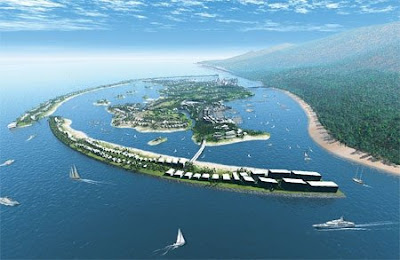 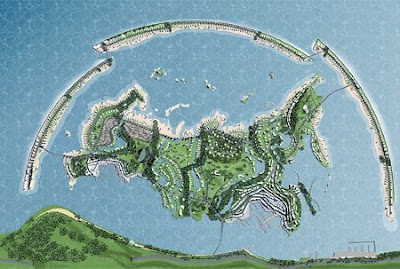 When Russians do something they seem to go all out. People seem to feel that Russians are dull, depressed and unhappy. I am here to tell you, that after I have spent over two years within the Russian Federation, They are not unhappy or dull! In fact they have very fantastic dreams that only can come from freedom of all expressions and money.

What am I talking about? Is he crazy?

Well: Take a look at Federation Island and then you decide….

Federation Island, the latest manifestation of Russia’s oil boom era ambitions, is to start rising next spring from the waters of the Black Sea, 150 yards off the coast of Sochi. From Kaliningrad to Sakhalin, this landscaped version of the Russian Federation is Russia’s response to Dubai’s Palm Islands.

Do not think miniature golf course, this is a 815 acre version of Russia that is to stretch 1.5 miles and cost $10 billion. Inside a breakwater crescent, an artificial archipelago is to contain a convention center, two marinas, and myriad hotels, villas, and apartments. To be operational by 2014 Olympics to full completion in 2020, Federation Island is to draw 100,000 people a day — tourists, residents, and workers.

“This island is about being outdoors, outdoor sports, a recreation area,” Erick van Egeraat, the architect, said in an interview in Moscow, poring over designs that showed sailboats and yachts plying the waters in this planned playground near Sochi, one of European Russia’s southernmost cities. In an echo of Miami, houses are to be built on narrow lots, with 10 to 15 meters of water frontage. In a liberal interpretation of geography, Russia’s “rivers” are to slice Federation Island from north to south, providing nearly 45 miles of water frontage to an archipelago with a total land surface area of only 1.25 square miles. (Link)

It should all be possible within five years, thanks to an unlikely real estate alliance that includes a Dutch architect, billionaire investors from Abu Dhabi, and Russian officials eager to create a Russia-shaped archipelago in time to greet visitors flying into Sochi for the 2014 Winter Olympics. 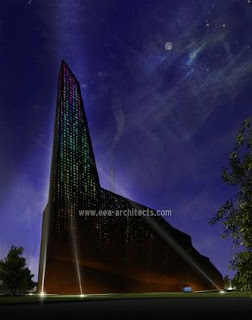 You may ask: Why would you build land in the country with the most land? Because it is cheaper than buying land in Sochi! Besides they want the Island to have the shape of Russia….

So Federation Island seems to have come to life, winning endorsements from the Kremlin down to Sochi’s City Hall. After permits fell into place during the first half of this year, M-Industry executives announced in June that landfill work would start in early 2009. Egeraat predicts that island construction will be complete by the summer of 2012 and that the hotels and marinas will be ready to greet visitors when the Winter Olympic Games open on February 7, 2014.

This is just so cool!