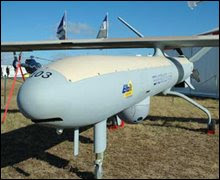 Now it is getting good, Georgia wants Russia to pay for drone?
——————————————–
Georgia calls on Russia to pay for downed drone Georgia says Moscow should apologize and pay it compensation for a drone that according to a UN report was shot down by a Russian jet over Abkhazia. Georgia’s breakaway republic of Abkhazia said it shot down the spy plane in late spring. Tbilisi has released a video claiming to show a Russian plane attacking the drone. Moscow strongly denies the allegations saying the tape was questionable. But on Monday the United Nations observer mission to Georgia issued a statement saying it believes Tbilisi’s version of the events. Russia’s ambassador to Georgia Vyacheslav Kovalenko says he does not “question the professionalism of the UN officials, but the evidence given to them was questionable”.
——————————————–
Georgia seems to have nothing better to do than irritate Russia…..