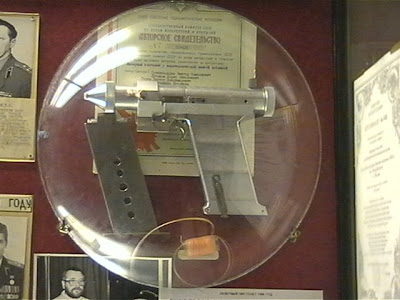 I have come across this article in several forms in the last few days. I get a chuckle out of it when I see it. In Russia you always have to build something better or first. It seems to be a Russian trait. It is a trait that I saw all my life in the USA & a trait that is very strong in Russia. I did an article months ago about the “Father Of All Bombs” it is a Russian bomb that is more powerful than the “Mother Of All Bombs” that the USA built. Like I said this is an important trait that Russians have……… (Link)
——————————————-
MOSCOW (RIA Novosti) – Russia started developing tactical laser weapons before the United States and has several prototypes of high-precision combat chemical lasers in its arsenal, a defense industry source said on Tuesday.

The Boeing Company said recently it had test-fired a high-energy chemical laser fitted aboard a C-130H aircraft for the first time. The successful ground tests, “a key milestone for the Advanced Tactical Laser Advanced Concept Technology Demonstration program,” took place on May 13 at the Kirtland Air Force Base, New Mexico.

Commenting on the announcement, the Russian expert said: “We tested a similar system back in 1972. Even then our ‘laser cannon was capable of hitting targets with high precision.”
“We have moved far ahead since then, and the U.S. has to keep pace with our research and development,” he added.
——————————————–
This is something that the USA & Russia have in common, they always want to be the best. That is another reason why I like Russia.