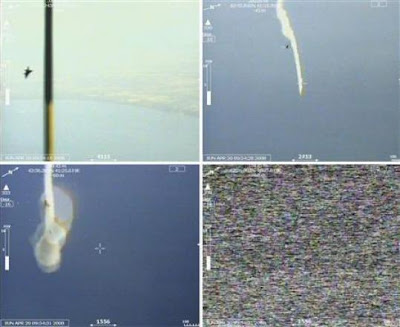 This is an article about the UN findings about the downed drone in Georgia. Articles have sprung up all over the Western presses about that the UN had said without a doubt the drone was shot down by a Russian Jet! The fact is that the UN failed to reach a positive conclusion…..Now the UN says that it was a Russian Jet…… Cool!
—————————————————————–
Russia’s Jet Might Have Downed Georgia’s Drone
The UN mission in Georgia has released a report on April 20 accident, when a spy drone of Georgia’s Interior Ministry was hit in the air of Abkhazia. It appears the experts failed to reach a final conclusion.
It emerged that the UN experts based their investigation on the tape allegedly made aboard the drone by Georgia’s military in online mode. The experts were even provided with the 12-second portion that hadn’t been released at first.

The expert conclusion appears at least vague, as there are no evidences explicitly proving that the drone was hit by Russia’s jet. The nine-page report of the UN representatives gives no idea what jet was shown on the video tape.

What’s more, the international experts were unable to find an airport from which the jet could have taken off. It might have been Krasnodar, but then, the jet would have to fly 366km in one direction and another 366km back to the airport. But its maximum flying range is just 700km.

The experts were probing into the events of April 20, which anew aggravated the relations of Moscow and Tbilisi. In Georgia, they claimed that Russia’s jet hit the drone of Georgia that day, violating the cease-fire agreement. Moscow rebuffed by saying that the same document banned Georgian aircraft from flying in Abkhazia’s air.
——————————————–
UN Got On Russia’s Back
UN mission in Georgia blamed on Russia the destruction of Georgia’s spy drone in Abkhazia’s air April 20. Based on that conclusion, Tbilisi again referred to Russia as to the conflict party rather than its intermediary and called for the urgent replacement of Russia’s peacekeepers in Abkhazia. Official Moscow denies the involvement, but some members of the State Duma leave room for such possibility.
The yesterday’s statement of the UN experts advanced the dispute around the destruction of Georgia’s spy drone to a new level. The conclusion says the tape provided by Georgia shows either MiG-29 or Su-27. The radars first spotted the jet at roughly 12 kilometers from Gudauta airport, Abkhazia, at the altitude of 2,800 meters, i.e. it could have taken off exactly from that airport. Having hit the drone, the jet flew back to Russia’s air space and headed for the Maikop-Krasnodar line, the experts specified.

Once the conclusion was ready, the UN lashed out at Russia blaming on it violation of cease-fire agreement coupled with the recent strengthening of peacekeepers contingent in Abkhazia.

Russia’s Defense Ministry bluntly denied the involvement. “Any violation of Georgia’s state border, the more so hitting its drone is completely out of the question,” said Colonel Alexander Drobyshevsky, who heads the press service of Defense Ministry.

In the RF parliament, however, they don’t completely cross out the possibility of Russia’s involvement. “More likely than not, it was Russia’s jet,” Gennady Gudkov said yesterday, calling on the authorities “not to react to the UN conclusions.” Gudkov is the deputy head at State Duma’s Security Committee.

But it appears that Moscow will have to explain in the end, at least Slovenia’s Minister of Foreign Affairs Dimitri Rupel voiced exactly that demand Monday on behalf of EU, where Slovenia presides nowadays.
—————————————————————-
The story changes by the day…….